A mix of port city and castle town, it is Fukuoka’s Downtown Hakata which offers Hanna Hussein a glimpse of her future and a peek at traditional culture

If you ask me which country is my favourite travel destination, with no doubt I’ll say Japan! Traveling (solo) feels easy there. It’s so safe, the people are so friendly and helpful, and it is so convenient to travel by public transport. 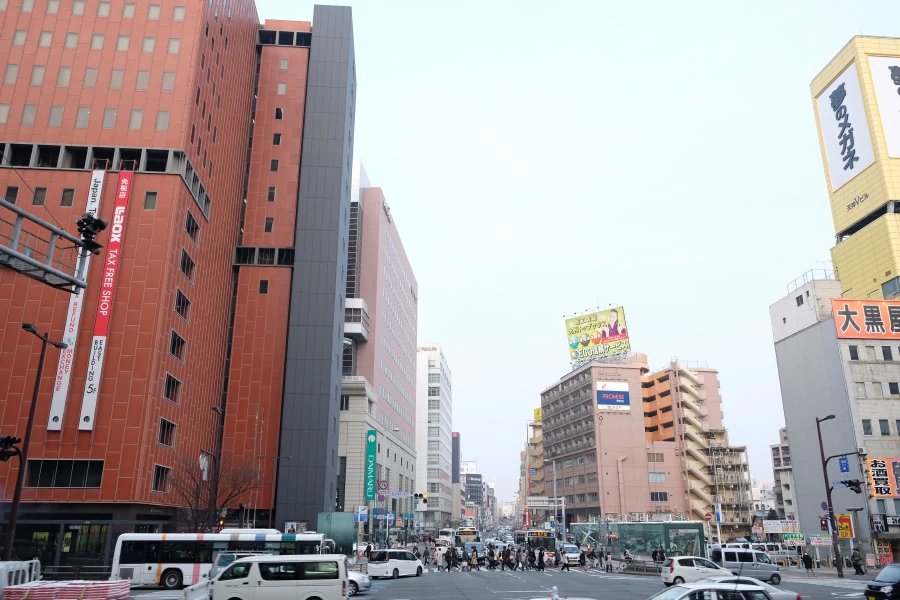 Japan has eight regions with 47 prefectures, and I have visited three regions — Kanto, Kansai and Hokkaido which AirAsia flies to. When I heard that AirAsia X was introducing a new destination in Japan, I was so happy!

AirAsia X now flies to Fukuoka in Kyushu region, Japan’s southernmost island. It is the only direct service in operation from Kuala Lumpur.

Operating four times a week, more than 156,000 seats a year will be available on this new route, providing us with the opportunity to book low-cost travel to yet another amazing destination in Japan. To introduce Kyushu Island to the Malaysian market, AirAsia X and Japan National Tourism Organization invited Malaysian media to join AirAsia’s inaugural flight to Fukuoka and I’m lucky to be one of the first to experience it.

GLIMPSE OF THE CITY

Flight D7538 departing from klia2 to Fukuoka takes off at 11.50pm on Thursday, and after six hours and 10 minutes, we arrive safely at Fukuoka Airport the next day at 7.10am local time. I managed to get a good night’s sleep, so by the time we landed, I’m fully recharged to kick off my quest in Kyushu’s one of Japan’s most populated cities and Kyushu’s largest. 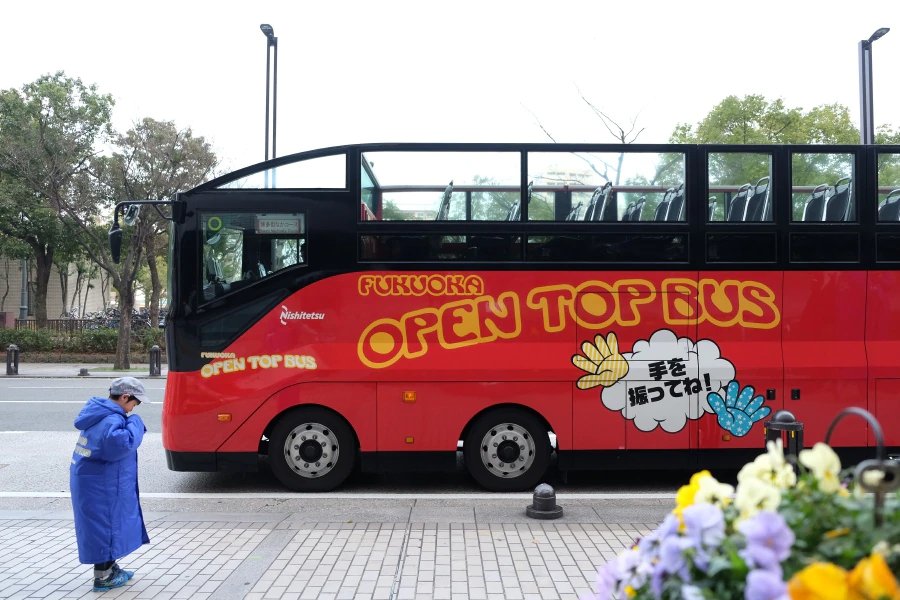 Sitting on the northern shore of Kyushu, Fukuoka was formerly two cities (the port city of Hakata and the castle town of Fukuoka) divided by a river before there was a merger in 1889. However, Hakata remains one of the central districts where Hakata Port and Hakata Station are situated. 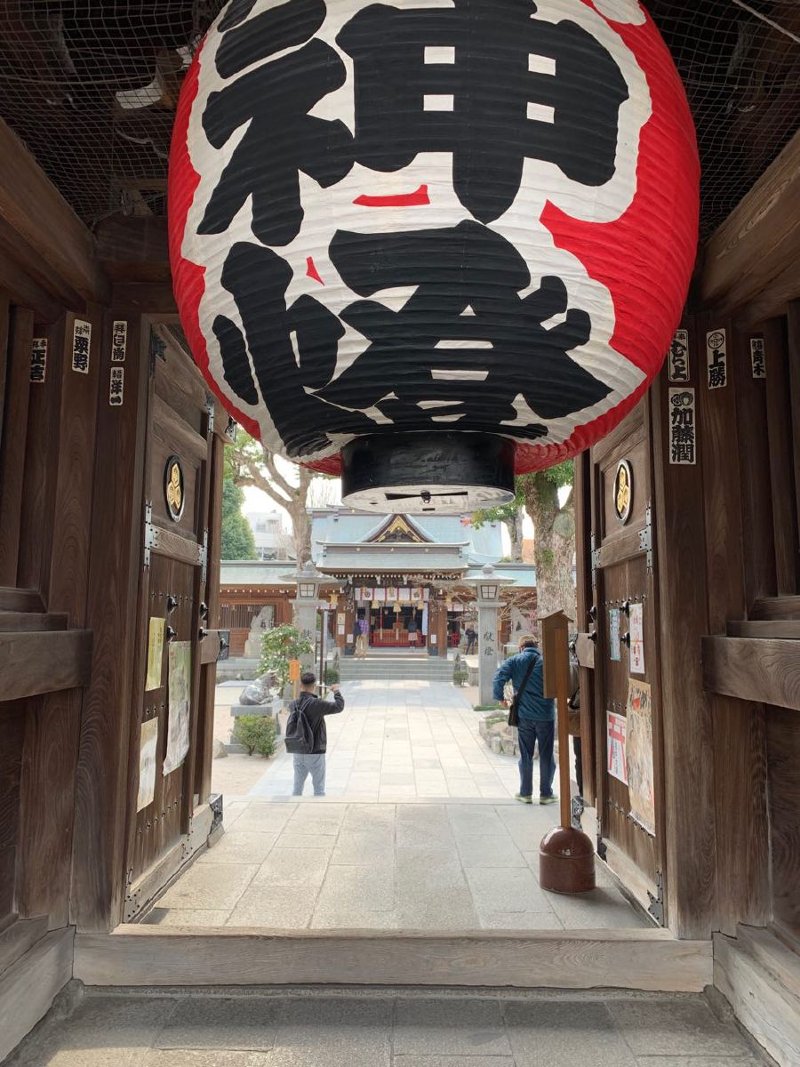 The view inside of Kushida Shrine.

Hakata Station is the main railway station in Fukuoka, a getaway not only to cities in Kyushu but also the best place to catch the bullet train travelling all over Japan, including Tokyo in the Kanto region. There’s also the subway link that connects to most of the city’s attractions — yes, getting around is effortless, just like travelling in Tokyo.

Fukuoka is also known as the “gateway to Asia” because of its close proximity to the mainland of Asia. In fact, you can cross to South Korea, taking the ferry that sails daily from Hakata Port to Busan in less than six hours.

To see more of the city, we hop on the Fukuoka Open Top Bus to see the main sights. For the price of ¥1,540 (RM53) per person (per tour) for adults and ¥770 for children aged 4-12 years, you can choose either one of three routes — Seaside Momochi, Fukuoka Twilight or Downtown Hakata. We opt for the latter where we will visit the historical areas.

The tour departs at 4.30pm from Fukuoka City Hall. The two-storey open-top bus gives passengers a vantage point of the cityscape from a height of 3.2 metres. I take the front seat, and safely buckle up.

Onboard, there is a host known as basuana who introduces Fukuoka’s charm and iconic landmarks along the tour, but she speaks in Japanese. Don’t fret, if you can’t understand the language, you will be provided with a device with recorded guides in English, Chinese or Korean.

The bus takes us on a brief tour, a glimpse of the city which includes Tochoji Temple, Hakata Station, Sumiyoshi Shrine, Fukuoka Castle Ruin and Kushida Shrine. The tour does not make long stops at the attractions, however passengers are allowed to get off at certain stops.

My advice, stay till the end and just enjoy the ride. Plus, it’s so lovely to be outdoors, especially during springtime in Fukuoka.

It takes an hour to complete the tour, and at the end of it, you’ll get an idea where to start your Fukuoka discovery. Oh, and the pass can be used to ride buses within Nishinjin, Ropponmatsu, Tenjin, Hakata and Hakozaki (only on the same day).

Ancient temples and shrines are some of the must-visit places in Japan. Your trip wouldn’t be complete if you haven’t taken at least one picture of yourself at the bright coloured torii gates, or at a zen temple.

The best place to experience shrines and temples, as well as traditional culture is in Hakata Old Town. Formerly the hub of Hakata, which was the largest port city of trade in Japan during the early 12th century, the area has a unique history, tradition and culture of the era. 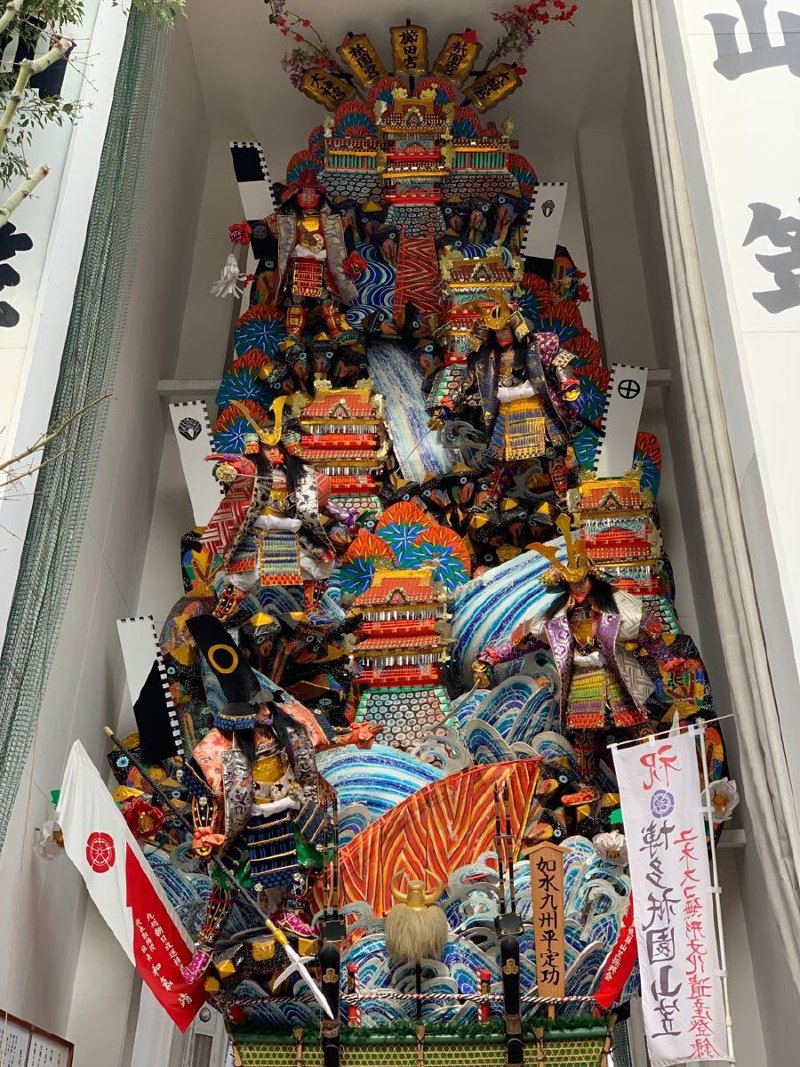 Yamagasa float is re-made in a new design during the Hakata Gion Yamakasa annual festival.

The Fukuoka City Guide (yokanavi.com) gives information on a self-guided walking tour of Hakata Old Town. There are two routes — the Authentic History of Hakt Shrines and Temples route offers a look at the birthplace of traditional culture as well as sights of the Great Buddha of Fukuoka at the east of Taihaku-dori Avenue (eight minutes’ walk from Hakata Station), and the other one is the Town of the Merchants Hakata Traditional Culture route which we will go on. 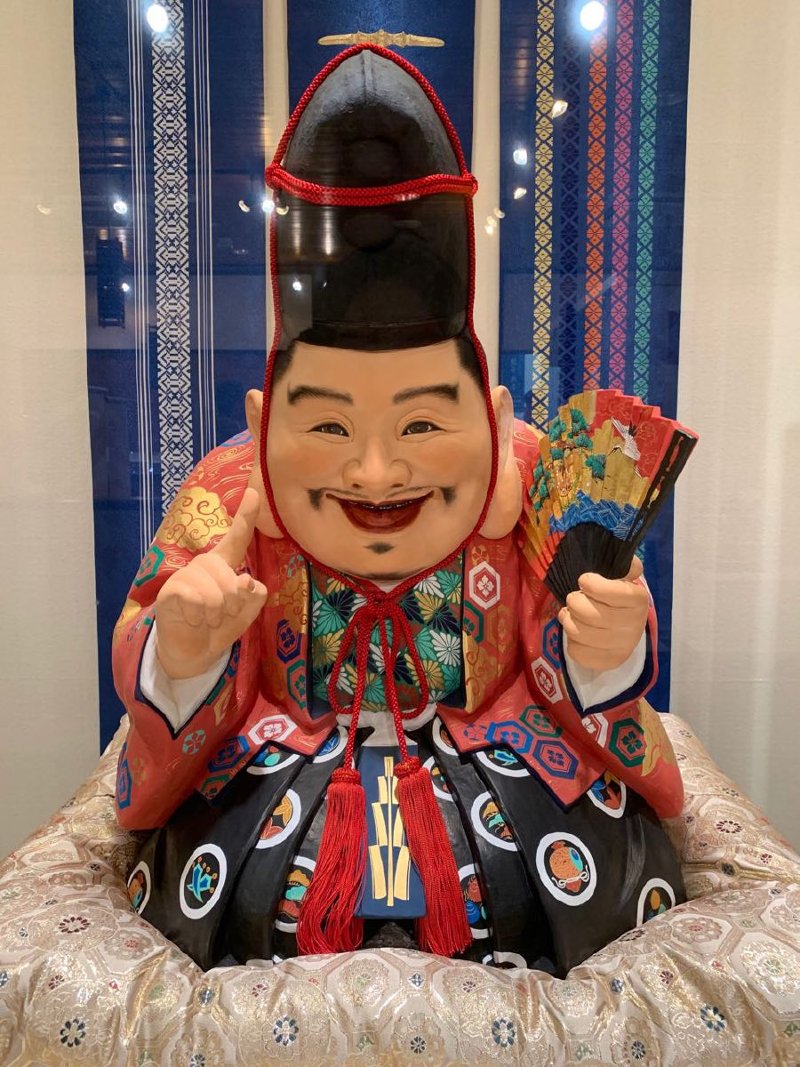 Fuku No Kami, the God of Good Fortune doll is one of the traditional motifs of Hakata Ningyo.

Located at the west of Taihaku-dori, the route takes visitors to the cultural sights of Hakata’s old centre of commerce. The walk passes Fukuoka Asian Art Museum, Hakataza Theratre and more. My favourite spot out of the eight stops is Kushida Shrine, a beautiful tutelary shrine, also known by the locals as Okushida-san.

According to oral tradition, the shrine was was built in 757 on the order of Emperor Koken to share the same god as Ise Shrine, located 780km away.

It’s quite a grand shrine to explore and there are many historic (and photogenic) spots. At the main entrance gate, look up and check out the Eto Eho Ban, the lucky zodiac. There are 12 animals on a big disc and a marker will indicate the lucky direction of the year — this year shows that those born in the Year of the Tiger may get lucky! 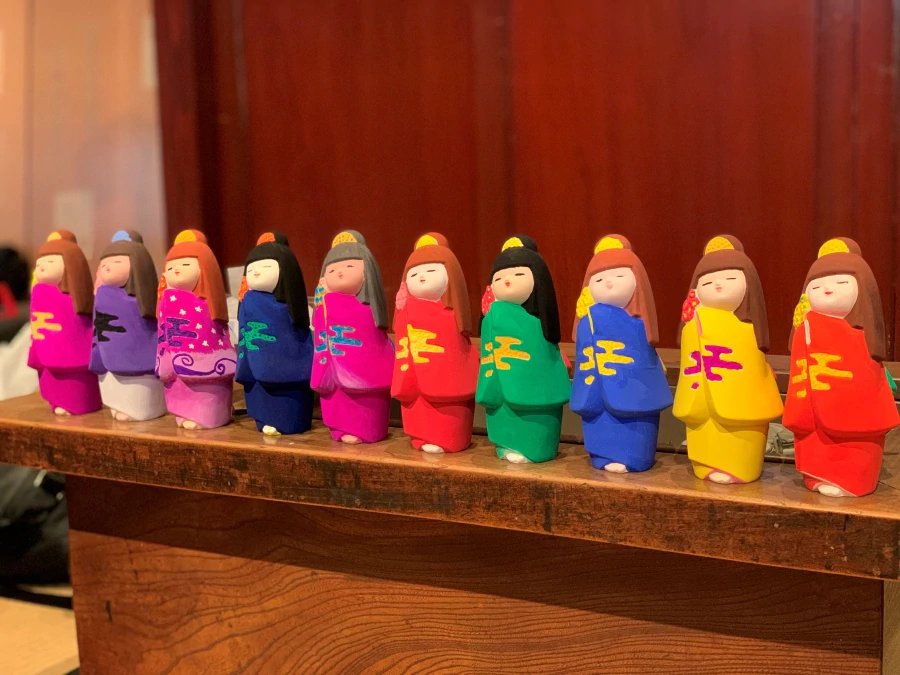 Paint your own Hakata Doll.

Another fun thing to do is to pick out the omikuji. For just ¥100, you can take one paper fortune to see your luck for the year. The paper fortune is available in English, Korean, Chinese and Taiwanese. I try my luck and receive a very lucky “like the sun rising in the morning” fortune slip which tells my fortune, travels, marriage and more.

If you walk further inside, you will find a large vibrant festival float known as Yamagasa. Made of wood, bamboo and Japanese paper and textile, the Yamagasa float was built to wish for peace and it is re-made in a new design every summer, during the Hakata Gion Yamakasa festival celebrated from July 1-15. The festival is dedicated to this shrine.

I also love the Hakata Traditional Craft and Design Museum which exhibits and sells exceptional works of traditional crafts. 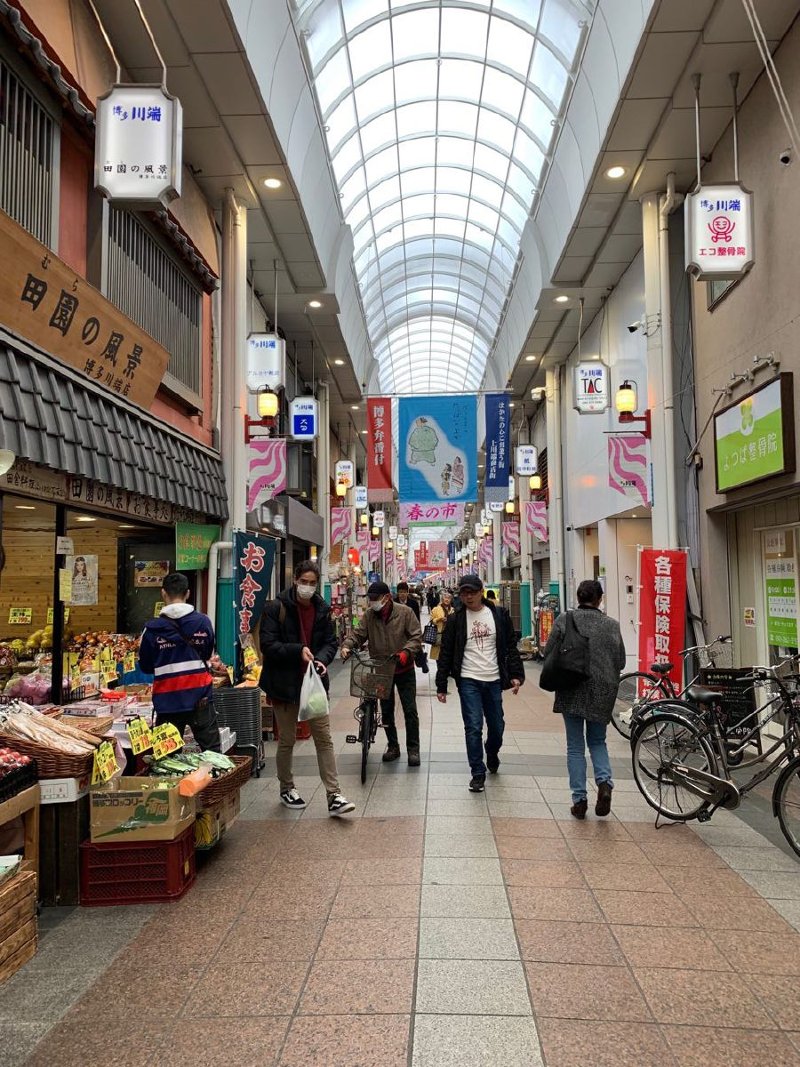 Among the permanent exhibition is Hakata-ori textiles. The very delicate woven textile is made using a refined weaving technique. The textile is used to make obi sashes, dresses and bags.

If you like dolls, the museum also features Hakata Dolls displays. It is said that in the 1600, during the arrival of Kuroda Nagamasa in Chikuzen province, many artisans were brought in. During the Meiji period, these dolls proved to be immensely popular. It’s amazing just to see the details on the dolls.

Head up to the second floor to see the main exhibition — Fuku No Kami, a large doll, 70cm in height, made by Shinkyo Nakamura. Fuku No Kami is the God of Good Fortune and the doll is one of the traditional motifs of Hakata Ningyo, a symbolic item of the museum. Take a picture with Fuku No Kami, and maybe you will be blessed with good fortune.

We head to Hakata Machiya Folk Museum, where we are invited to Machiya Hall where one can see the inside of a traditional townhouse built in the mid-Meiji period as both a factory and residence of Hakata-ori weavers.

There, you can join workshops on Hakata Doll-Making (held on Monday, Friday, Saturday and Sunday), Hakata Paper Mache (Tuesday), Hakata Top (Wednesday) as well as Hakata Wood Craft (Thursday). You can even watch a Hakata Weaving Demonstration held daily.

We get to paint Hakata Dolls. We have an hour to paint a traditional clay doll with vibrant colours. This activity is really fun and calming but needs focus especially when painting the details. Psst… the Hakata Doll is a good souvenir!

Our walk ends at Kawabata Shopping Arcade, the oldest of its kind in Hakata. The street is 400 metres-long with 130 shops selling everything from souvenirs and Japanese traditional clothing to Yamakasa festival merchandise. The street is also lined with restaurants that serve seafood from Genkai-nada Sea and popular ramen houses.

Very near to Kawabata Arcade is Canal City, a large shopping and entertainment complex known as a city within a city. It boasts numerous attractions including shops, cafes, restaurants, theatre, game centre, cinemas and two hotels. Canal City Fukuoka Washington Hotel where we are staying offers great accommodation for solo travellers and families.

There are many shops in Canal City including Vans, Onitsuka Tiger, Uniqlo and Lush. Oh, and tax-free refund is available too — so you can shop till you drop! 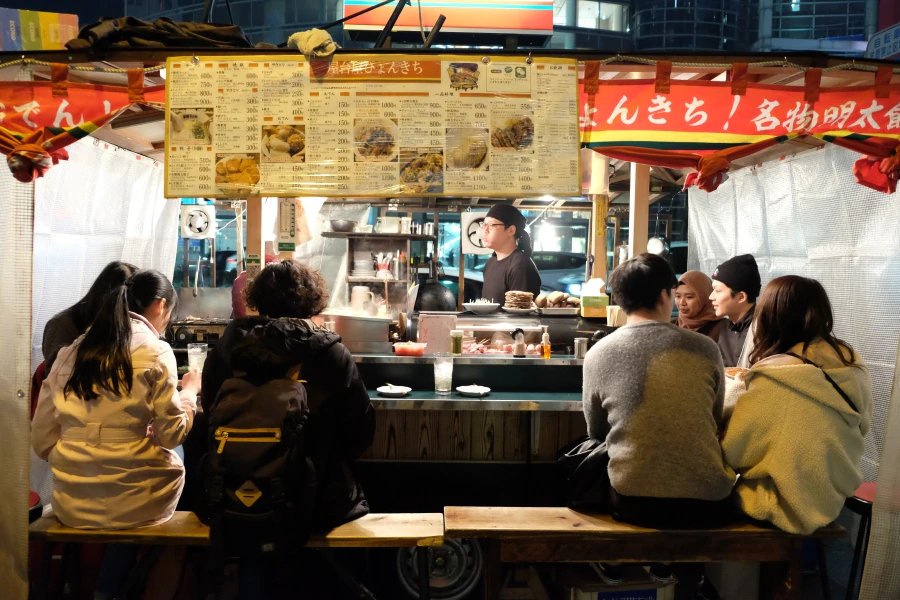 Done with shopping, you can enjoy relaxing by the canal that runs through the complex while enjoying the lighting fountain.

If you want to get the local vibes, try out yatai, Fukuoka’s open air food stalls. There are plenty of yatai in Fukuoka but the best is at the southern end of Nakasu Island. Ride the ¥100 loop bus from Hakata Station, which takes less than 15 minutes.

It is a row of 20 small stalls along Naka river, and one stall can seat seven to eight people at a time. You can enjoy various local food (mostly simple delicacies) at an atmospheric outdoor environment. Typical dishes include grilled chicken skewers (yakitori), hot pot (oden) and the famous Hakata ramen. Me? I eat Mentaiko Tamagoyaki, creamy omelette served with salty fish roe. Delicious!

HOW TO GET THERE

AirAsia X is the only airlines that offers direct flights from Kuala Lumpur to Fukuoka four times a week. 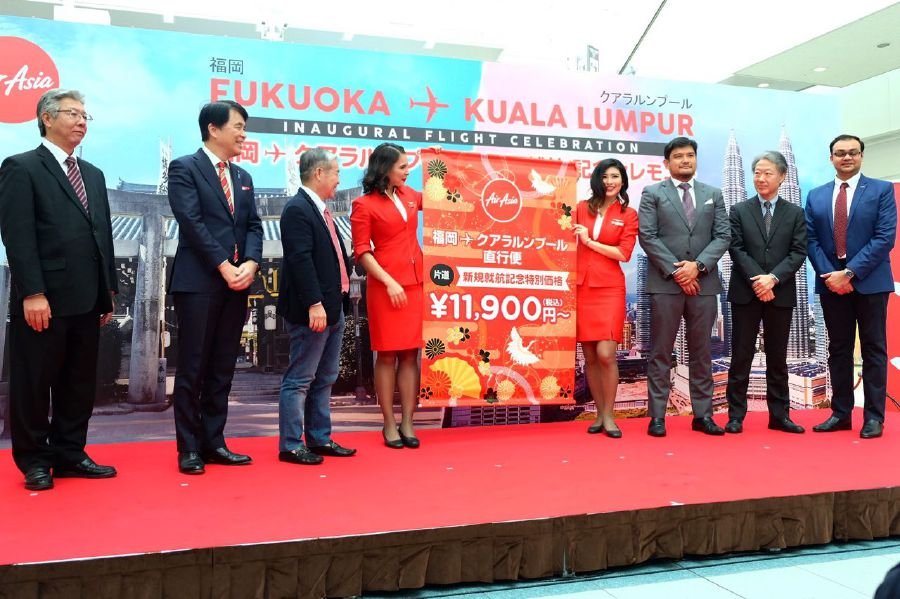 You can now fly to Fukuoka, from Kuala Lumpur via AirAsia X.

Fly in comfort with the Premium Flatbed, the spacious seat that reclines to become a full flatbed when desired. It also features a privacy screen, adjustable head and foot rest, as well as pillow and duvet for maximum comfort.

Those travelling on a Premium Flatbed can enjoy 40kg baggage allowance, in-flight meal and entertainment, dedicated check-in counter, priority boarding as well as AirAsia Premium Red Lounge access in klia2. AirAsia X was the first low cost carrier in the world to introduce flatbed seats, and at reasonable prices too!