RESIDENTS in Port Dickson will reap the benefits from their proximity to the Kuala Lumpur International Airport and klia2 following plans by a “big airline” to carry out a programme in the resort town.

Pakatan Harapan candidate for the Port Dickson by-election on Oct 13 Datuk Seri Anwar Ibrahim said a friend from the airline pledged to do his bit for the people in the constituency. 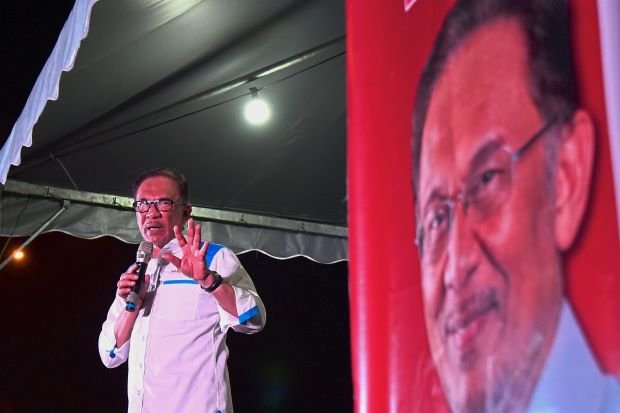 “I just managed to talk to him about having a programme for the people in Port Dickson.

“He has agreed and I will announce the details soon,” said Anwar while campaigning in Kampung Seri Parit, Lukut.

Anwar, who will be in a seven-cornered fight in the by-election, said the other two other plans were a special education programme for Year One to Form Five students and the construction of a five-star hotel as well as affordable homes.

“I will also announce details of the education programme and the hotel, which will create job opportunities for locals soon,” he said, adding that making jobs available at the hotel would help reduce the exodus of youths to other cities.

He added that all the programmes planned for Port Dickson would be spearheaded by the private sector.

“The hotel will help create other economic activities in Port Dickson that will further boost efforts to promote tourism here,” he said.

Anwar said efforts would be made to revive some abandoned projects in Port Dickson.

“We can do many things if there is a genuine commitment to promote Port Dickson,” he said.

There are about 15 such projects in Port Dickson that mostly belong to the private sector.

“I will look at the overall infrastructure facilities if given the mandate to lead,” he said.

Anwar stressed that he was not making the announcements just to get into Parliament.

“However, as an incoming MP, I need to look after my constituents and ensure there are good economic opportunities in my area once I am elected,” he said.

He reiterated that government machinery would not be used during his campaigning.

Anwar urged voters to exercise their constitutional right on polling day to ensure a good turnout.

“I need your support because there have been attempts to prevent me from becoming an MP,” he added.