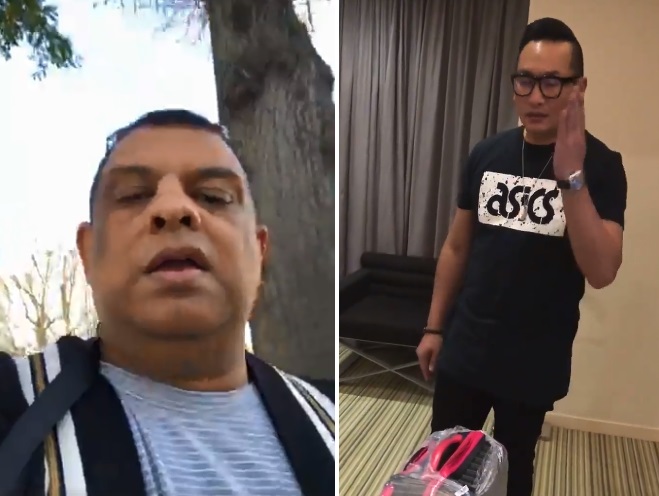 “He really should’ve contacted me,” the AirAsia Group CEO said in a Facebook Live video on Monday (Apr 17).

“Not our boys’ fault – it’s KLIA’s baggage chute system, which is very steep,” Fernandes said, adding that the airline was working with klia2 to resolve the issue.

AC Mizal had on Friday posted a video to his Facebook timeline, complaining about a piece of luggage which he said was found damaged after his flight from Penang to Kuala Lumpur.

Saying he was “frustrated” and “so upset” with the airline and its customer service, the celebrity said he did not understand how AirAsia was named the best low-cost carrier.

His video was quickly shared online and has so far garnered more than 86,000 views.

But Fernandes disagreed with AC Mizal’s online rant, saying he should have checked the facts before complaining publicly.

“To simply blame AirAsia ramp boys is wrong. He should know better being a celebrity – check first.

“But our boys are in touch and we’ll see how we can help him,” he said.

After the airline chief spoke up, AirAsia’s head of communications Aziz Laikar posted a follow-up video showing bags being shot out of a chute and onto a conveyor belt at KLIA2.

“This is what Tony meant when he spoke about the KLIA2 baggage chute (in his Facebook live video today) which has caused damage to baggage… including Dato AC Mizal’s bag,” Aziz wrote.

In March, Fernandes and AirAsia CEO Riad Asmat had posted personal apologies after a customer’s bike was damaged. The customer had posted a video showing AirAsia staff hurling bags with little care.

Fernandes said then that the airline was taking “full responsibility” for the two men’s actions.