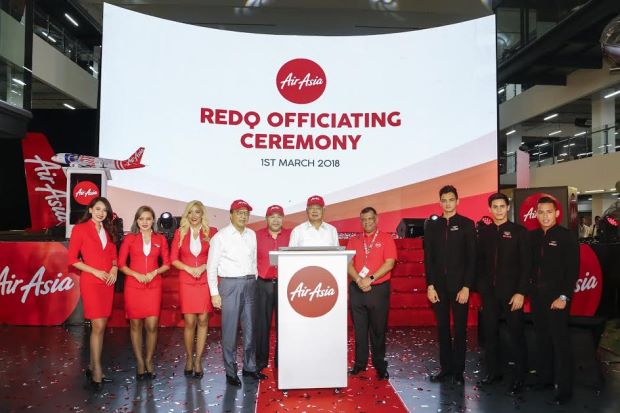 Fernandes said that Najib had gone the "extra mile" for AirAsia and mentioned how he had agreed to lower the Passenger Service Charge at the low-cost carrier terminal (LCCT) when he was deputy prime minister in 2007.

"Thanks to that bold move, even with only six months left in that year, we saw passenger traffic at LCCT jump 31% to 7.6 million," said Fernandes at the officiating ceremony of AirAsia's corporate headquarters RedQ at Kuala Lumpur International Airport 2 (klia2) on Thursday (March 1).

"I don't think it's too much to say we would not be where we are today if not for your wisdom and vision," he said.

Fernandes also praised Najib for achieving a GDP growth of 5.9%, a low unemployment rate of 3.3% and the creation of 2.26 million jobs since 2009, with one million of those being high-income jobs.

"That is the kind of Malaysia we want to see. A high income, high skills Malaysia blazing the trail for Asean and beyond in the 21st century, and aspiring to be a Top 20 nation by 2050 in line with Transformasi Nasional 50 (TN50)," he said.

"We are very glad to have a Prime Minister who has backed us all the way, who wants to build a Malaysia where opportunity is available to all," said Fernandes.

AirAsia's corporate headquarters RedQ was officiated by Najib on Thursday.

The ceremony was witnessed by over 2,000 AirAsia employees, known as Allstars, and was telecast live to the airline's Penang, Johor, Kuching and Kota Kinabalu hubs.

RedQ, which is short for RedQuarters, encompasses an area of 18,000 sq m, housing more than 2,000 AirAsia employees, or Allstars.