The “caLLme” e-hailing app for taxis, which was officially launched at Kuala Lumpur International Airport, is aimed at giving taxi drivers a boost in competitiveness against larger, deeper-pocketed e-hailing platforms.

Created as a collaboration between the National Cooperative Movement (Angkasa) and Malaysian Taxi Drivers, Limousine and Car Rental Operators Association (Petekma), the platform already has over 1,600 drivers using the app at KLIA. 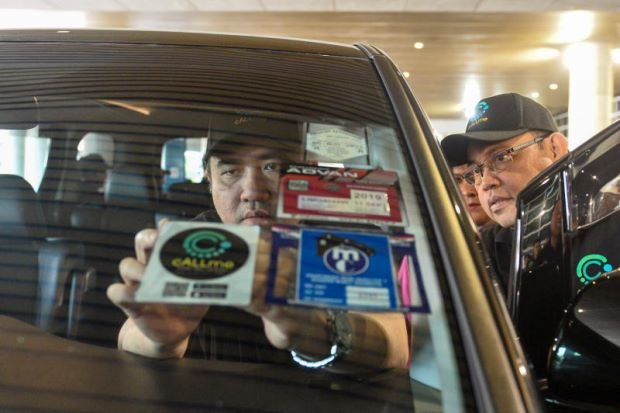 The app, said Petekma chairman Mohd Syahrir Abd Aziz, plans to expand to klia2 soon, before going on to major cities as well as Langkawi island.

Angkasa president Datuk Abdul Fattah Abdullah said “caLLme” was aimed to help taxi operators and cooperatives in Malaysia, and that the cooperative movement would also work to provide training for drivers to help them benefit from the new technology.

He added that as consumers now required services at the touch of a fingertip, cooperatives had to adapt to this need to ensure the survival of their business,

Transport Minister Anthony Loke, who launched the app on Saturday (Dec 15) and also booked a ride with it, said it was more productive to focus and put time into improving the taxi industry’s competitiveness, rather than demonstrating.

“It’s not that you cannot demo, it is your right to voice your unhappiness with government policies,” Loke said, alluding to previous demonstrations by taxi drivers who wanted e-hailing apps in Malaysia abolished.

“But we need to face to reality, that if we want to improve the taxi industry, we need to upgrade with the use of modern technology,” he said.

Voicing his support for the app’s development by Angkasa, the minister said for caLLme to succeed, it needed more strategies, marketing effort and more importantly, driver take-up.

Loke acknowledged that e-hailing platforms had been a major challenge to traditional taxi business, where there were now 70,000 registered taxi drivers, with 60% of them under the control of companies.