Deputy Prime Minister Datuk Seri Dr Ahmad Zahid Hamidi made a jibe at Tun Dr Mahathir Mohamad, saying he should be “taking care of his grandkids” instead of staying in politics. 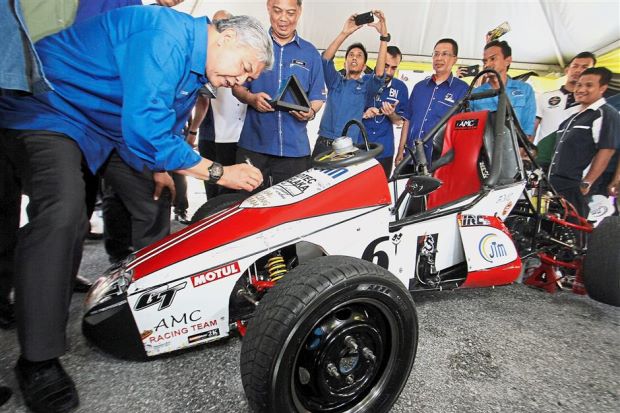 Making a mark: Dr Ahmad Zahid (left) during the launching of the ‘Back to School: Preserving the Environment’ programme at SK Sungai Nipah in Bagan Datuk.

He said the 93-year-old former prime minister is back in the political arena because he wants his lineage to assume power.

“A political party is not a family heirloom, nor is it a parent’s right to pass it down to their children.

“A party belongs to the people,” he said at an event with Barisan Nasional candidates within the Sepang constituency yesterday.

“Leaders are who they are today because of the support they received from the party and its members.

“This includes the then prime minister who was in power for 22 years but left behind a string of problems affecting the judiciary, agencies and so on.

“Whatever developments he has brought, we appreciate them. But after his rule, the leaders who took over also contributed a lot.

“Is he terhebat (the best)? I don’t think so,” he said, referring to Dr Mahathir.

On the “Malay tsunami” trumpeted by the Opposition that a big number of Malays will vote for Pakatan, he said this was not the case.

“The tsunami that will really happen is a tsunami of lies to occur within the next 24 hours.

“They will use surprises, last­-minute attacks to flood us with all kinds of slander.

“But we are the wall that will protect such lies from conquering the hearts of voters,” Dr Ahmad Zahid said.

Revving up the crowd to support the four Barisan candidates under the Sepang constituency, he said Sepang was a well-known location in the international arena due to landmarks like the Sepang International Circuit, KLIA, klia2 and the free trade zone.

“But the areas outside of these places are not developed because the state is under Pakatan rule.

“I promise on behalf of our Barisan hopefuls, we will bring development to such areas and upgrade existing facilities, especially in villages,” he said.

Dr Ahmad Zahid assured Sepang folk that work opportunities would be provided to them in line with the development which Barisan would be implementing.

“We don’t want the people of Sepang to be a mere audience of development.

“We want them to be part of such advancement,” he said.