North Korean chemist Ri Jong-chol, who was previously arrested to facilitate investigations into the murder of Kim Jong-nam, has been blacklisted from entering Malaysia.

Deputy Prime Minister Datuk Seri Dr Ahmad Zahid Hamidi said this was because the Malaysian government did not want any to see the existence of any elements or quarters wanting to make this country as the base for hidden agenda.

“He entered the country with the intention to work with a company, but police investigations found that he did not work at the said company.

“Instead, he engaged himself in activities which the Malaysian government never approved…we do not want such elements in our country,” he told reporters after opening the 7th annual general meeting of the Malaysian Felda Youth Council here yesterday.

Ahmad Zahid was commenting on the latest development in the murder investigation of Jong-nam, half-brother of North Korean leader Kim Jong-un at the KL International Airport Lumpur 2 (klia2) on Feb 13. 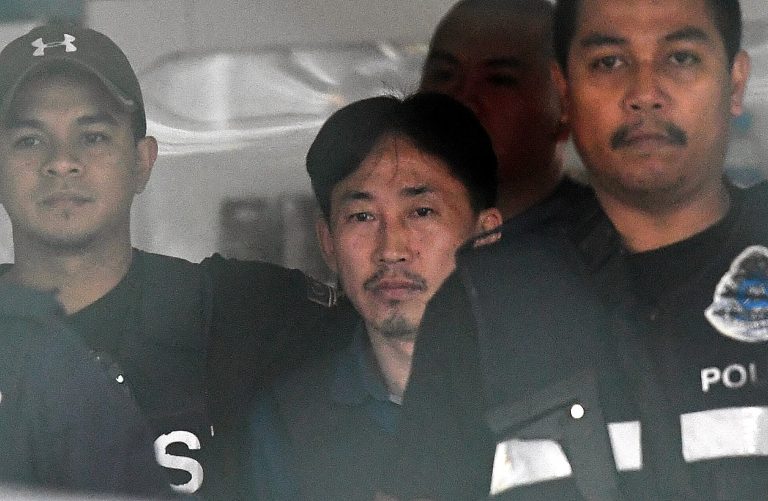 Ri Jong-chol is accompanied by a heavily armed escort while wearing a bulletproof vest as he makes his way out of the Sepang IPD during his deportation on March 3, 2017. Bernama Photo

Jong-nam was reportedly using a passport bearing the name of Kim Chol while in Malaysia.

Ahmad Zahid said Jong-chol, 47,  would be flown to Beijing later yesterday evening and later to Pyongyang, accompanied by two officials from the North Korean Embassy.

On Thursday, Attorney-General Tan Sri Mohamed Apandi Ali said Jong-chol, who was remanded since Feb 18, would be released on lack of evidence to prosecute him.

When asked on claims that two suspects sought over the investigation were believed to be ‘hiding’ at the North Korean Embassy, Ahmad Zahid said some diplomatic procedures had to be followed.

Meanwhile, Ahmad Zahid said the next-of-kin of the deceased need not necessarily come to this country to give a DNA sample for the purpose of body identification.

There are other methods to get the samples, he said without elaborating.

On the Kuala Lumpur-Pyongyang relationship after the North Korean Ambassador to Malaysia Kang Chol continued belittling Malaysian over the investigation of the murder, Ahmad Zahid hinted at serious repercussions and that the embassy would ‘pay a high price’ for it.

“As an ambassador, even when the script comes from a source he has known so well, he still has to respect the legal system, ethics, culture and the normal practice in our country, as well as the conduct of international diplomacy,” the deputy prime minister said.

Ahmad Zahid, who is also Home Minister, reiterated that the police had been conducting the investigations in a professional manner based on strong evidence from four elements, namely the DNA, forensics, chemical substance, and high-definition closed-circuit camera footage.

Jong-nam was at the klia2 on Feb 13 to board a flight to Macau when two women suddenly appeared before him and allegedly wiped his face with the palms of their hands which contained what was later identified as the VX nerve agent.

He was rushed to the Putrajaya Hospital but died on the way.

Two women, 25-year-old Siti Aisyah, 25, an Indonesian, and 28-year-old Doan Thi Huong, a Vietnamese, were charged in the Sepang Sessions Court on Wednesday with the murder of ‘Kim Chol’. — Bernama