Shares in Malaysia Airports Holdings Bhd (MAHB) jumped to its highest level in more than a year after its first quarter results ended March 31 came in better than what the market had expected.

But its seemingly steep valuations are a turnoff for stock analysts. 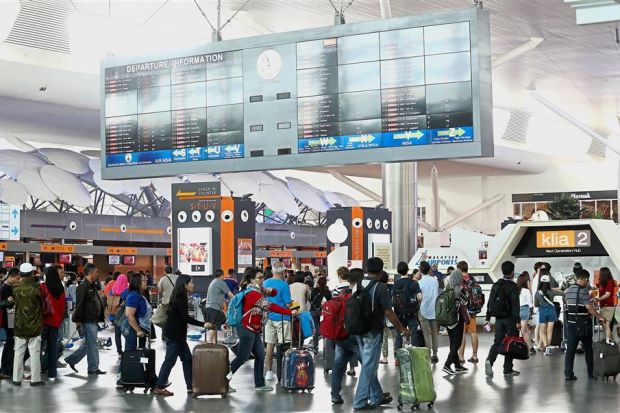 Strong growth: Travellers making their way to check-in counters at klia2. AffinHwang said the MAHB’s improved performance was due to robust passenger growth in its Malaysian operations

AffinHwang Capital Research in a report yesterday maintained its “sell” rating on the stock with an adjusted target price of RM6.30.

This was after MAHB’s earnings before interest, taxes, depreciation and amortisation (ebitda) of RM497mil for the first quarter came in ahead of market’s expectations.

AffinHwang said the improved performance was due to robust passenger growth in its Malaysian operations as airports in Malaysia registered a solid 11% year-on-year (y-o-y) higher passenger movements during the quarter.

It noted that Turkey operations were also turning around, with passenger movements decline slowing to 1% y-o-y in the first quarter.

AffinHwang said MAHB’s share price has performed strongly, rising more than 22% for the past three months and with this latest results the research house had increased its 12 months discounted cash flow derived target price to RM6.30 from RM5.80.

This, it said is in line with the higher 2017-2019 earnings estimates after imputing higher passenger growth but noted its “sell” on the stock was given that the share-price rally looks to be ahead of fundamentals.

“We also see elevated earnings risk in the second half with the expiry of the klia2 warranty period to pressure ebitda growth. Risks include a sustained rebound in overall passenger traffic,” it said.

Meanwhile, CIMB Research said MAHB’s costs in Malaysia were expected to rise in future quarters given that a new collective agreement to hike staff salaries from May and maintenance spending will likely pick up pace.

In addition, Sabiha Gökçen International Airport’s (ISG) first quarter loss of RM44.4mil was more than double the previous year’s due to a fall in traffic, making up 42% of CIMB Research’s previous full-year numbers.

“We have discounted the value of the 35-year extension period by 50% as the terms have not been finalised, a full value will add a further RM2.30 to our target on the current terms,” it said with an unchanged “add” rating on the stock.