In a dramatic breakthrough in investigations into the assassination of North Korean leader Kim Jong-un’s half-brother Kim Jong-nam, police stormed a hotel here in the wee hours of the morning to arrest the second suspected assassin.

The cops got their breakthough when they arrested the second woman’s boyfriend earlier. The woman was using an Indonesian passport bearing the name Siti Aishah, from Serang in Banten province neighbouring Jakarta.

Sources said Siti Aishah may have abandoned the first suspect – the “LOL” girl – and sought refuge at the hotel in Ampang, waiting to flee the country once the “coast was clear”. 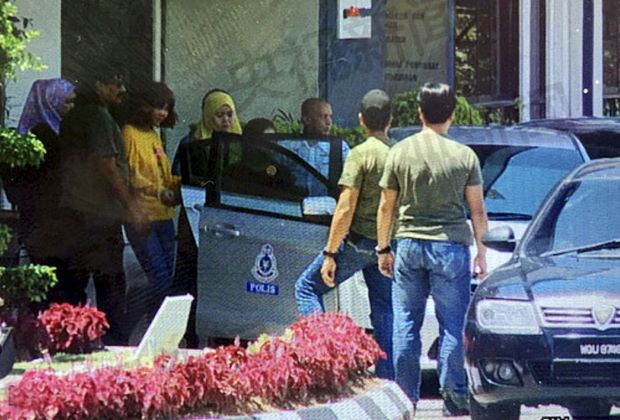 Detained: Siti Aishah (in yellow top) being escorted into a police car after another woman Doan Thi Huong was arrested a day earlier in connection with the assassination of Jong-nam earlier this week. — Pix courtesy of CCTV

The first suspect, a woman bearing a Vietnamese passport under the name of Doan Thi Huong was arrested on Wednesday.

Police believe the two women and four men, currently being hunted by police, had done a “recce” at klia2 a day before the attack.

The police believe the suspects might have carefully planned the attack as they did a surveillance on the airport’s security a day earlier.

“They might have been in the middle of choosing the right secluded spot to attack him at the departure hall,” the source said, adding that the four men could be the “brains” behind the attack.

As the hunt escalated, police stormed a third floor room of a hotel in Ampang at 2am yesterday to nab the woman known as Siti Aishah.

She had been staying there by herself since fleeing the airport after the killing.

Sources said the room was unlocked when they barged in.

They recovered a stack of cash in foreign currency, including three US$100 notes.

They also seized two mobile phones – one without a SIM card and the other with a local SIM card.

Among the other items found in her room were a Louis Vuitton purse, a shawl, Ray-Ban sunglasses and Charles and Keith shoes.

The sources said her boyfriend Muhammad Farid Jalaluddin, 26, had driven her from a hotel in Bandar Baru Salak Tinggi, where she had been staying with “Thi Huong”.

“Thi Huong” was arrested on Wednesday as she was about to board a flight to Vietnam.

Farid, however, is not a prime suspect.

“He is not one of the prime suspects but he is assisting us with the investigation,” said Selangor police chief Comm Datuk Seri Abdul Samah Mat.

“Information that he gave led us to the arrest of the second suspect.”

He said “Thi Huong” and “Siti Aishah” have been remanded until Feb 21.

On Monday, a taxi driver, who had transported “Thi Huong” from KLIA2 to her hotel in Bandar Baru Salak Tinggi was detained and questioned.

Sources said police are now trying to ascertain how the two women were linked to the four men still at large and what role Farid played in the whole matter.

They entered the compound of the embassy at around 12.50pm and left about 15 minutes later.

They refused to comment on the visit when met by reporters.

One of them, an assistant superintendant, told Bernama: “You should ask my boss. You can maybe wait for my boss to give a statement.”

Jong-nam was at the KLIA2 waiting for a flight to Macau when two women attacked him with poison.

He died en route to the hospital in Putrajaya. He arrived in Malaysia from Macau on Feb 6.