COMPETITION is seen abating in Malaysian skies as low-cost carrier (LCC) AirAsia looks set to end 2017 with an even bigger slice of the domestic market. Asia’s largest LCC group by passenger volume, the airline has surpassed the 50% market share mark for the year so far domestically as rivals Malaysia Airlines and Malindo Air cut back on domestic capacity.

The last time AirAsia achieved this was before Malindo Air’s entry into the local market in early 2013. For the nine-month period to Sept 30 (9M2017), its domestic market share stood at 51% compared with 46% for the whole of 2016. 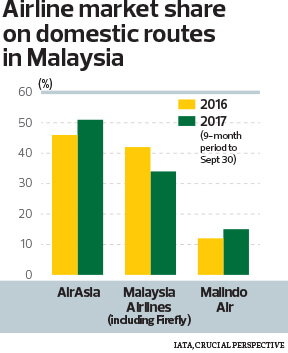 On a quarterly basis, AirAsia has stayed above the 50% threshold for two consecutive quarters, according to data from the International Air Transport Association (IATA).

“This is significant because not only did AirAsia manage to gain market share on domestic routes, the carrier also managed to improve its average fare and revenue per average seat kilometre (RASK) in the second quarter of 2017 (2Q2017),” she tells The Edge.

Meanwhile, Malaysia Airlines is cutting domestic capacity by a fifth this year, then-CEO Peter Bellew said in August as it looks to steer clear of a fare war that has gripped the domestic sector in recent years.

In late July, the airline said it is returning six narrow-body Boeing 737-800 to lessors over the second half of 2017. The planes are being removed from domestic routes, including flights between Kuala Lumpur, Kuching and Kota Kinabalu due to low yields, it said at the Invest Malaysia 2017 conference.

In 2018, Png expects the domestic market share split to remain at 51% for AirAsia, 34% for Malaysia Airlines and Firefly collectively, and 15% for Malindo Air.

“This is already a comfortable lead. As the year progresses, we expect AirAsia’s domestic market dominance to grow while Malaysia Airlines and Malindo’s market shares are likely to drop,” she tells The Edge.

While easing competition may translate to higher fares for domestic flyers, the full impact on air passengers’ wallets may be more gradual, says Png. 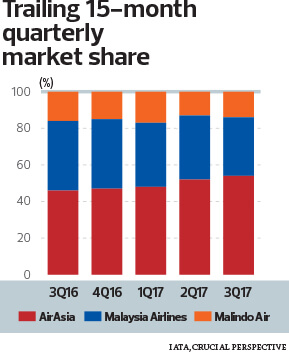 This year, AirAsia is expected to grow available seat kilometres (ASK) by an average of 10%, according to MIDF Research in June, as the group is scheduled for a net addition of 27 new aircrafts.

AirAsia has told investors that it is expecting to take delivery of 28 new aircraft in 2018. As at end-2016, its group-wide fleet had 174 planes. Its website says its Malaysian operations currently has 81 planes.

The LCC does not give guidance to investors on market-specific capacity expansion forecasts. But while the deployment of the new planes is not yet certain, analysts The Edge spoke to expect domestic capacity in Malaysia to see strong growth next year.

“I expect AirAsia’s domestic capacity in Malaysia to grow by a low double-digit percentage next year,” says one research analyst who declines to be named.

One gauge of that is the domestic passenger volume growth at the KLIA main terminal building (MTB), where Malaysia Airlines and Malindo Air are based. Malindo Air used to operate out of klia2 but shifted in March 2016 as it rebranded as a full-service carrier.

Between January and October 2017, KLIA MTB saw domestic passenger volume shrink by 0.1% y-o-y while klia2 saw a corresponding growth of 11.1% y-o-y, according to the latest data released by Malaysia Airports Holdings Bhd (MAHB) on Nov 10.

In a Sept 25 note, CIMB Research expects Malaysia Airlines and Malindo Air to reduce their collective domestic capacity from KLIA MTB by 23% by end-2017, and AirAsia to grow its klia2 capacity by 11.7%.

Commenting on capacity growth prospects in general, Png remarks that AirAsia should balance market share pursuit with profitability. “Investors tend to focus more on whether AirAsia can maintain or grow its RASK and profit margins than going after more volume per se.”