An analysis of video footage frame by frame in the minutes before and after the attack on Mr Kim Jong Nam on Feb 13 found that seven male North Korean suspects had "surrounded" the victim, the New Straits Times reported yesterday.

While six of them had been named by police previously, the closed-circuit television camera footage found a new possible suspect from North Korea who was hovering close to Mr Kim to ensure the attack by two women assailants was successful, the newspaper said. 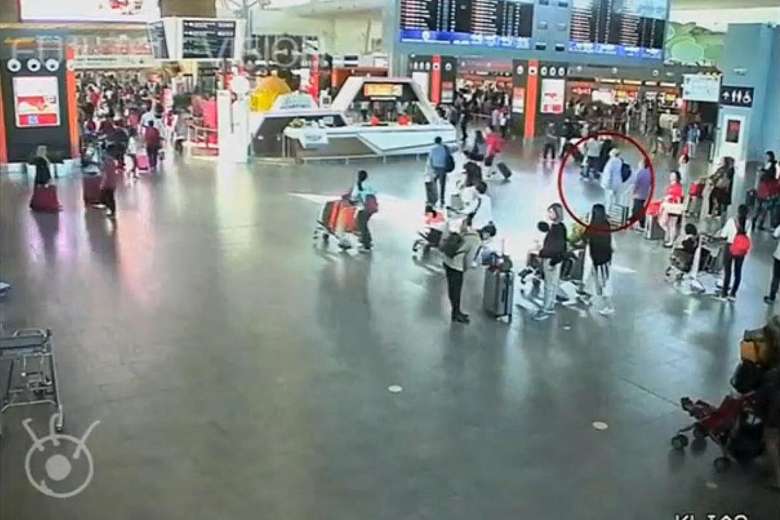 A screengrab from CCTV footage showing Mr Kim in a terminal at the klia2 on Feb 13. Two women have been charged with his murder.PHOTO: REUTERS

The seventh man is believed to be one Chang Nam Un, who is in his mid-30s, the paper quoted a source as saying. "An expert suggested that Nam Un was among the suspects tasked with making sure that this do-or-die mission was a success," NST said.

Mr Kim, the estranged half-brother of North Korean leader Kim Jong Un, was killed last month soon after he arrived at the second terminal of Kuala Lumpur International Airport (klia2) to catch a flight to Macau. He was attacked by two women – an Indonesian and a Vietnamese – who smeared the toxic VX nerve agent on his face.

Malaysian police said four of the North Korean nationals who were at klia2 flew out of Malaysia soon after the murder. Two other suspects are believed to be hiding in the North Korean embassy in KL.

NST said the seven men quietly stood by surrounding Mr Kim as he was attacked by the two women. The new suspect, Chang, is believed to have played a significant role in the murder plot.

"He entered the CCTV's frame as soon as Jong Nam began making his way to the self check-in counter" at klia2, where Mr Kim was attacked by the two women.

After the attack, one of the women crossed paths with Chang and raised her hand. The unnamed expert quoted by NST said this was to indicate that "the job was done".

Chang then quickly changed direction to cross paths with the other assailant, though it was not clear if they exchanged signals as well.

The Malaysian newspaper, owned by the country's ruling party Umno, had carried several exclusive reports about the murder in the last few weeks, including suggesting that binary chemicals were used to create the toxic VX agent. It was also the first media outlet to report that Mr Kim's body had been embalmed.

Police said earlier this week that Mr Kim's remains have been positively identified after DNA samples from his child were brought to Malaysia. His body remains unclaimed at the morgue of the Kuala Lumpur general hospital.

North Korea has rejected Malaysia's findings and insisted that the dead man was not Mr Kim.