AirAsia group CEO Tony Fernandes shares email from customer which he says justifies his efforts to make flights cheap for the average person.

AirAsia Group chief executive officer Tony Fernandes shared an email he received recently saying it highlighted why the “battle must never stop” when it comes to keeping the cost of flying within reach for everyone. 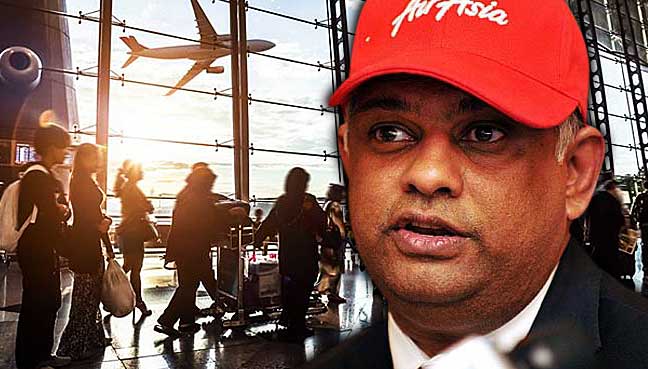 Fernandes posted a message on Facebook, calling it the email which “made my year”, and said it justified his intention in pioneering the low-cost carrier industry in the region.

“All I and AirAsia have ever tried to do was to make it cheaper for the average man to dream and fly like those with money. One day airports, regulators and politicians will understand,” he said alluding to the controversy over the increase in passenger services charges (PSC) at klia2, which is the main hub for AirAsia.

“I’m probably one of the most unpopular men for being outspoken and trying to make flying affordable. But won’t stop till the slogan I came up with in the shower becomes true. ‘Now Everyone Can Fly’. The battle must never stop,” he wrote on his FB page.

In the letter emailed to Fernandes, the author thanked the AirAsia boss for making “my dream come true”.

“The reason why I admire you is simply because you and your company truly made my dream come true, to fly with affordable price. So the tag line ‘now everyone can fly’ was truly deep for me.

“My dad was bankrupt, so we lost everything. I was starting my life from 0. When I got married, we had very little savings. But we wanted to go a honeymoon.

“Then it happened, thanks to AirAsia. I remember January 2008, we went to 2 cities, KL & Bangkok with AirAsia. We could afford the price…” said the AirAsia customer, who is believed to be from Indonesia.

The self-confessed fan of the airline tycoon also spoke highly of the latter’s book, calling it a source of great inspiration.

“My job requires me to travel alot. So I read it on my flights. I finished it all during my return journey between Jakarta and Hongkong.

“At home, in my spare time, I read it again and again. I have also marked every single inspiring thing that you’ve done.

“Now I know, behind the ‘now everyone can fly’ (slogan), there was a lot of blood, tears, sadness, and also happiness. You are so great sir,” the author wrote, adding that the book was a birthday gift from a sibling.

The email author also spoke of being able to bring the “entire family” to Singapore, Malaysia, Thailand and Hong Kong, saying “AirAsia helps me a lot to fulfil my dream, and it’s because of you and the whole AirAsia team”.

The email ended with a Christmas and New Year greeting for Fernandes and the author’s wish to one day get a chance to meet him in person.