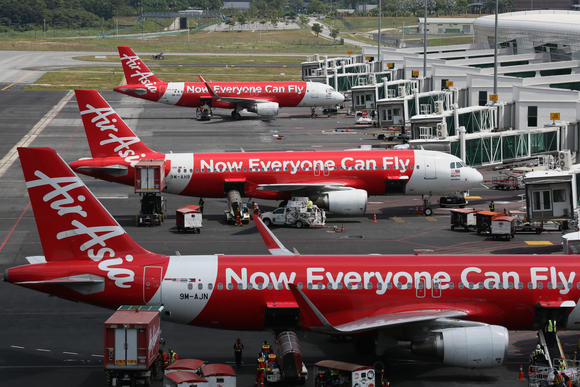 AirAsiajets are loaded at the Kuala Lumpur International Airport 2 for budget carriers. (Photo by Keiichiro Asahara)

Malaysia Airports Holdings, the state fund-controlled airport operator that manages the country's biggest airport as well as 38 others, said it is trying to position the gateway as a regional hub.

The terminal is known as klia2 and is 2km from the main terminal building.

"klia2 is the registered name of the terminal under the International Air Transport Association," Malaysia Airports said in a press release on Monday. "Calling it by any other name would only serve in misleading and causing confusion to the public and passengers."

The statement came in response to AirAsia, the dominant budget carrier that uses klia2. AirAsia had launched a campaign to call the facility Low-Cost Carrier Terminal 2, or LCCT2.

"To me, klia2 doesn't mean anything," AirAsia CEO Tony Fernandes said in a press release earlier on Monday. Fernandes reasoned that the name LCCT2 would complement the "best value fares" that AirAsia and other budget carriers offer.

The terminal opened two years ago with an annual capacity of 45 million passengers to replace the old LCCT, which could no longer handle the growing number of budget flyers.

In 2015, the terminal's passenger traffic grew 9.5% to 26 million, more than the 23 million that passed through the airport's main terminal, used by full-service airlines.

Malaysia Airports recently launched its KLIA Aeropolis plan, meant to turn a 100-sq.-km area around the gateway into a city. The plan envisions both the main terminal building and klia2 becoming a regional aviation hub.

AirAsia has argued with Malaysia Airports in the past, once over fees.