AirAsia will continue to promote klia2 as the Low-Cost Carrier Terminal (LCCT) with a whopping US$5mil (RM20.08mil) to be spent on its marketing campaign, said group chief executive officer Tan Sri Tony Fernandes. 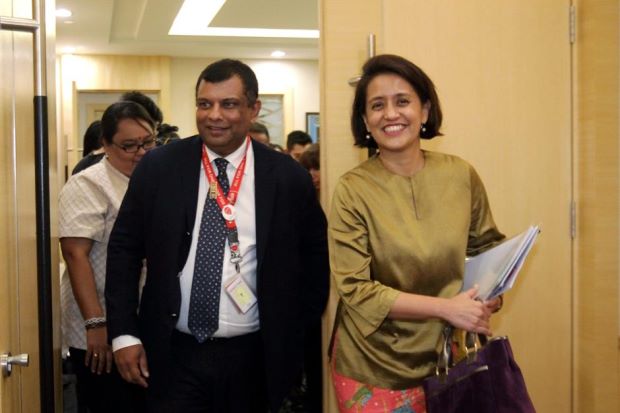 “In anticipation of more LCCTs (coming up in the future), we will call it LCCT KL, the low cost hub of Asia, and a one-stop to anywhere in Asia at the lowest fare,” he tweeted after meeting Transport Minister Datuk Seri Liow Tiong Lai in Putrajaya on Wednesday.

AirAsia would not spend the money in Malaysia but in other countries to promote klia2 like Dubai Airport, which is a major transit hub.

He said during the two-hour meeting, the minister had taken note of the airline’s plans to promote klia2 as the regional low-cost hub.

The meeting between Fernandes and Liow was to iron-out issues between AirAsia and airport operator, Malaysia Airports Holdings Bhd (MAHB), which has been locking horns on the name and branding of klia2.

“Very good meeting with Liow and Director General of Civil Aviation Datuk Seri Azharuddin Abdul Rahman. Most important is the acceptance that our terminal is a low-cost hub.

“Important issue is not the name but that it’s promoted inside the terminal and to the world that KLIA has a low-cost hub with low fares,” he said in the micro-blogging site, twitter.

Fernandes was confident that Liow would be able to find a good “win-win” solution for both AirAsia and MAHB.

“The goal is to get more of Asean, Asia and the world to use our low-cost hub. One million (people have travelled through klia2) so far this year. We want to grow that. (This) will be great for the economy,” he added.

Liow had announced earlier that klia2, should not undergo a name change.

However, he assured that the ministry was willing to hear AirAsia’s proposal to position klia2 internationally as a leading low-cost terminal to further enhance the nation’s tourism and aviation sectors.

MAHB managing director Datuk Badlisham Ghazali said earlier that the airport operator would reserve its right to maintain the klia2 brand including resorting to legal action. (Click here for story)

On other developments, Fernandes said he discussed the potential of turning the old airport in Malacca into a low-cost terminal.

“We want to use the Malacca airport. We have been so successful with the Langkawi Airport now. But we still haven’t been able to get MAHB to open the (Malacca) airport to us,” he said.

He said AirAsia was about to start the Langkawi-Hong Kong sector and the airline was keen to replicate such initiatives in Malacca. – Bernama