Expressing his displeasure on Twitter, Fernandes said that AirAsia Bhd CEO Aireen Omar had to keep "wasting her time" making trips to Malaysia Airports Holdings Berhad (MAHB) to sort out the matter. 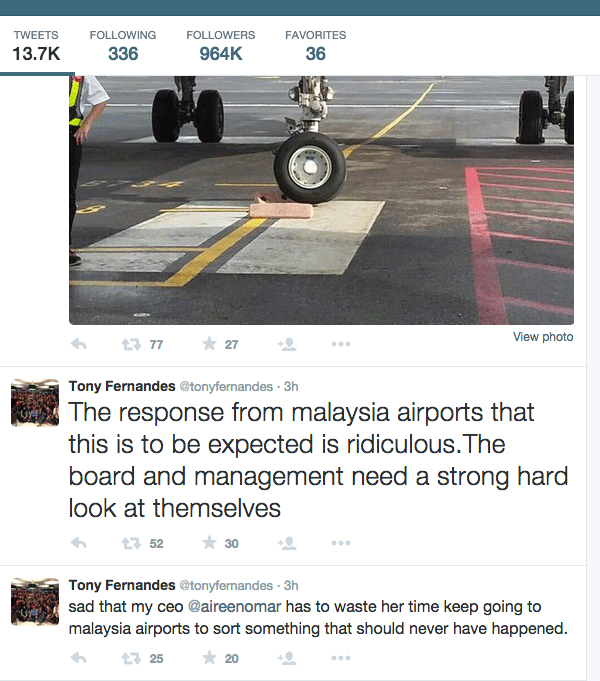 "Sad that my ceo @aireenomar has to waste her time keep going to malaysia airports to sort something that should never have happened," he said via his Twitter handle, @tonyfernandes.

In a series of tweets, Fernandes also hit out at MAHB, saying that their response to the sinking was "ridiculous", and urging the airport authority to improve themselves.

"The response from Malaysia Airports that this is to be expected is ridiculous. The board and management need a strong hard look at themselves," he said.

Earlier today, Aireen was reported as saying by Bloomberg that klia2 was sinking, with cracks appearing in the taxiway and water forming pools that planes had to drive through.

She warned that the defects could cause flight delays, increase wear and tear on planes and pose potential safety risks.

Bloomberg said although take-offs and landings aren’t affected, AirAsia, which is the terminal's biggest user, had asked Malaysian authorities to fix the problems before any untoward incidents happened.

Fernandes, who had previously criticised MAHB and the Transport Ministry for a myriad of problems before the airport was opened last year, also posted a picture of a plane on the klia2 tarmac with its wheels twisted.

"Is this to be expected? 8 hour delay due to plane slipping off chocks. The board has to take responsibility," he said.

klia2 had been riddled with issues even before it was opened, including the ballooning of its costs from the initial RM1.7 billion to RM4 billion.

An independent audit committee was set up in December to conduct a detailed investigation of the sinking surfaces at the apron and runway with the aim of ensuring safety at the airport, Transport Minister Datuk Seri Liow Tiong Lai had said.

He said the committee would be given until the first half of this year to complete the report and action would be taken based on it. – July 27, 2015.