According to Matta visa-fee free (VFF) could be perceived as a half-hearted gesture.

MALAYSIA could potentially lose 540,000 Chinese tourists for not granting visa exemption, according to the Malaysian Association of Tour and Travel Agents (Matta).

Its president Hamzah Rahmat said that it’s unfortunate that free visas instead of visa-free entry is offered to tourists from China.

“It is regrettable that we are only trying to play catch-up with Asean countries that had earlier waived visa fees when we should seize the opportunity now to overtake them by granting visa exemption,” he said in a statement.

“Paying for a visa is not the main issue as the amount is peanuts to most Chinese tourists who are the world’s biggest spenders globally. What has deterred many to visit Malaysia was the hassle of having to apply and wait for a visa,” he added.

According to Hamzah, visa-fee free (VFF) would be perceived as only a “half-hearted gesture” and that Chinese tourist arrivals could decline to 1.76 million instead of the expected 2.3 million.

“The Home Ministry may have cited security as the reason for not granting visa exemptions but the existing policy had not prevented over three million undocumented migrant workers in the country,” he stressed. 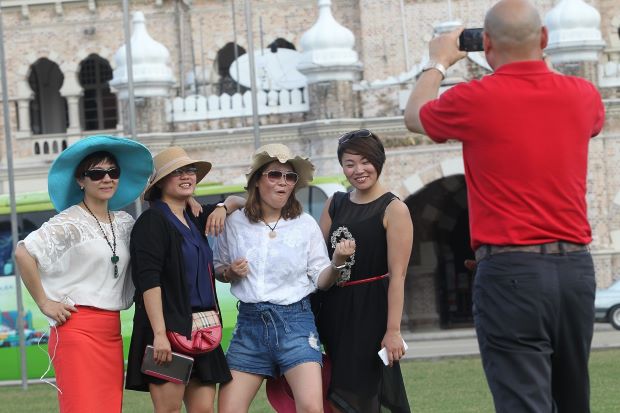 Chinese tourists posing for a photo in front of Merdeka square in Kuala Lumpur. According to Matta, not granting visa-free entry could deter tourists from China to visit the country. – Filepic

“Matta had repeatedly pointed out the need for visa-free entry to attract more tourists but sticking to our guns will only result in a loss of several billion ringgit which is sorely needed to pump up our economy.”