Malaysia Airports has announced the winners of its KLIA/klia2 Shopping Hunt contest, organised in collaboration with local radio stations MYFM, SINARfm and MIXfm.

“Chong and I became friends because of our common interest particularly in online games. We are both also avid listeners of MixFM so when we hear about the KLIA/klia2 Shopping Hunt we decided to go online and give it a shot,” said Lim.

Chong added: “While playing the Shopping Hunt, we found that we both also liked shopping but never in our wildest dreams (did) we think that we would win the grand prize.”

The duo’s shopping list included smartphones and tablets as well as presents for their wife and girlfriend. “We have not been to klia2,” Lim revealed. “We didn’t realise that there are so many retail shops here. As Malaysians, we should be proud to have an international airport like klia2.”

The KLIA/klia2 Shopping Hunt aimed to offer "a fun avenue to experience and explore klia2", said Malaysia Airports, especially for first timers who have never shopped at klia2. 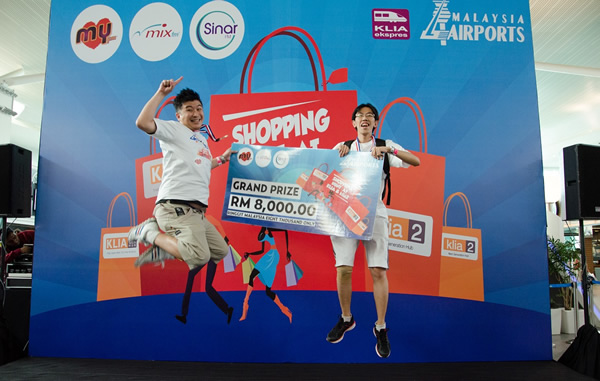 Adventure and gaming buddies Lim Ming Yang and Chong Voon Kiat celebrate their win of RM8,000 (US$2,230) in cash vouchers to shop at klia2

For two weeks, MYFM, SINARfm and MIXfm listeners who wanted to participate had to log on to the respective stations’ websites and play an online memory game, matching products with logos in the shortest possible time. Each radio station then selected five names (finalists were required to find a partner to form a team), with the final 15 teams battling it out in the finale at klia2 for the grand prize.

The second prize winners were a father-and-daughter team comprising Chai Koh Khai and Chai Kye Lii, who walked away with RM5,000 (US$1,400) in cash vouchers. The third prize went to old friends Zahar bin Amir and Ahmad Daud Abd Manan, who won RM2,000 (US$560) in cash vouchers.

In addition to the three main prizes, a myriad of consolation prizes were given away as well, totalling RM17,000 (US$4,700) in cash vouchers. Winners had until 8.30pm on the same day to utilise their cash vouchers at klia2. 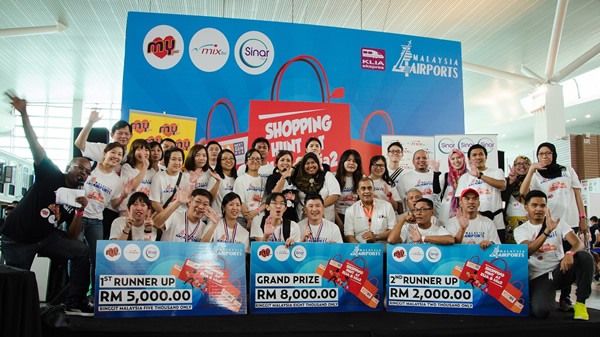