While most airports in Southeast Asia have seen healthy growth or recovery, passenger increases at Malaysian airports have been cramped by capacity cuts at Malaysia Airlines, aviation disasters, cost increases and haze from forest fires in Indonesia. 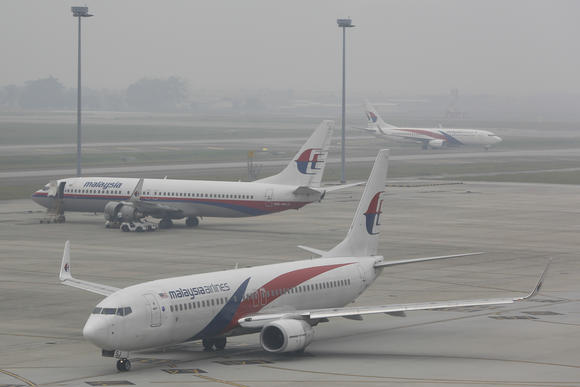 Widespread haze from forest fires in Indonesia's Sumatra and Borneo have only added to the woes of Malaysia's aviation sector. © AP

Malaysia's total traffic grew only 0.7% year on year to 75.6 million passengers by the end of November according to data from Malaysia Airports Holdings, which operates all but one of the country's 40 airports.

November saw a contraction of 2.7% which the company attributed to "double digit percentage [yearly] decline in Malaysia Airlines passenger carriage". In October, 5.3% fewer passengers used airports compared to the previous year because of severe haze from Indonesia spreading across almost all the country.

Bucking the trend, Kuala Lumpur International Airport 2 (klia2) enjoyed a 9.3% increase in traffic with 23.6 million travelers passing through for the year ending in November. Opened in May 2014, klia2 caters to regional low cost carriers like AirAsia and Cebu Pacific, which is operated by Cebu Pacific Air and Jetstar Asia.

Malaysia Airlines is undergoing comprehensive restructuring that will see it cut almost 30% of its long-haul routes to Europe and Australia. From February, a code-sharing agreement with Dubai-based Emirates, the world's largest carrier by seat capacity, will link it to 91 long-haul destinations from the Gulf. The airline will focus instead on developing a profitable regional route network. Other remedial measures include substantial layoffs and contract renegotiations with suppliers.

"Malaysia is still recovering from the aftermath of the triple (aviation) disasters last year," said Mohshin Aziz, an aviation analyst from Maybank Research, referring to the loss of two Boeing 777s by Malaysia Airlines and an Airbus 320 by AirAsia with a total loss of 699 lives.

Mohshin said the introduction of a goods and services tax in April and currency depreciations had also adversely affected ticket demand. The government is meanwhile mulling a hike on airport taxes next month that could further dent traffic. Malaysia levies 65 ringgit ($15) for international destinations and nine ringgit for domestic ones.

Though troubled at home, Malaysia Airports Holdings has done better with investment abroad. Traffic up to November grew 19.5% year on year to 26 million at Sabiha Gokcen International Airport in Turkey, which it owns entirely. Located on the Asian side of Istanbul, the airport is the Turkish capital's second international gateway after Ataturk International Airport.

Singapore handled 45.5 million travelers in the first ten months of the year, a 2.1% improvement on 2014. Over 100 airlines use Changi International Airport, connecting to some 320 cities in 80 countries.