An image of Kuala Lumpur International Airport 2 (klia2) terminal shared by AirAsia group CEO Tan Sri Tony Fernandes on his official Twitter account shows a section of the airport covered in a puddle of water. 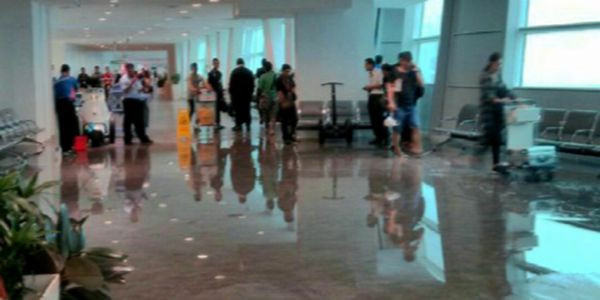 “Flood in klia2. Hmm,” said Fernandes through his account @tonyfernandes.

In the photo, patrons could be seen making their way across the puddle and trying to avoid the flooded area.

The picture shows that the flooded area was cordoned off by a “Caution Wet Floor” sign.

The image posted earlier today has received 501 retweets as well as garnering criticism from netizens regarding the state of the airport’s condition.

Twitter user, @Adam_bakri puts the blame at Malaysia Airports Holdings Berhad (MAHB) for their lack of ability to handle such problems: “@tonyfernandes this is what u get when u have an incompetent mgmt at mab who zzz all day-endless problems.”

“@tonyfernandes suppose not to happen in 5 billion airport. Zzz,” tweeted user, @ashrafasarah.Another Twitter user, @pisangreput, said that the airport’s construction, which was rattled with controversies, may be the cause of such an event.

Another user, @na2kap hopes that the situation will be resolved as being an airport, klia2 is the centre for tourism activity and the nation’s credibility was at stake if the matter was left to recur.

In 2014, a video showing flooding at the klia2’s apron, the area where aircraft are parked for loading or unloading passengers or cargo, refuelling, parking or maintenance, went viral on social media and collected negative perception of the airport’s condition.

However, MAHB denied the apron was flooded, saying that it was just a puddle which formed after a heavy rainfall, as reported byThe Sun Daily at the time.