Saudi Arabian low-cost carrier Flynas is targeting between 4,000 and 5,000 passengers per month, for its newly launched tri-weekly non-stop flights between Jeddah and Kuala Lumpur from April 2014. 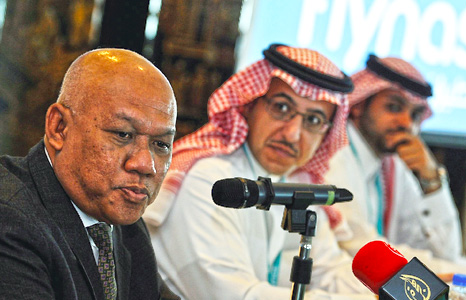 CEO Raja Mohd Azmi Raja Razali (picture) said with over 229,000 Malaysians who travelled for haj and umrah from Kuala Lumpur to Saudi Arabia last year, the carrier sees good opportunity to tap into this growing market and into the growing influx of passengers from Saudi Arabia to Malaysia altogether.

“Over 73,000 Saudi tourists arrived in Kuala Lumpur last year, and with the growing number of haj and umrah travellers heading to Saudi Arabia, we believe we can hit a target of 330 passengers a week from Malaysia to Jeddah,” he told reporters at the launching of the carrier in Kuala Lumpur yesterday.

He said Kuala Lumpur is the inaugural destination of Flynas’ Global Flight Routes programme, which will feature an affordable international route network across Europe, Asia and Africa adding that all of Flynas’ international flights will operate out of its hub in Jeddah.

“As part of our Global Flight Routes programme, we are also looking at other destinations that are set to be rolled out namely London Gatwick and Manchester in the UK, Paris, Jakarta, Karachi, D’seldorf, Moscow and Casablanca.

“The expansion of our network to include destinations that are seen as high-growth markets is a key element of our strategy to lead the airline into an aggressive development,” the CEO said.

“We are also talking to several domestic airlines in Malaysia in terms of sharing basis whereby Saudi tourists can fly to several other tourist cities in Malaysia like Langkawi, Penang and to East Malaysia,” he said, pointing out the carrier will be operating from Kuala Lumpur International Airport (KLIA) for now and see viable options to move to klia2 later part of the year.