The newly-launched klia2 will take its place among the world’s best airports with the opening of two of Travelex Malaysia’s first airport Bureau De Change (BDC) at its premises recently.

The BDCs place klia2 among those that Travelex, the world’s largest foreign exchange company, has selected as prime locations to do business in. The company has a presence in over 100 airports globally, including 20 of the world’s 30 busiest airports in London, New York, Paris, Dubai, Atlanta, Amsterdam, Tokyo, Sydney, Hong Kong and Beijing.

“Travelex recognises that klia2 being a low-cost terminal, will be used by the majority of Malaysian travellers, and we’re delighted to offer them our core benefits and values,” said Travelex Malaysia chairman Tan Sri AP Arumugam. “We currently cover over 40% of the world’s airport travellers and we’re proud that we can count those using klia2 among them.” 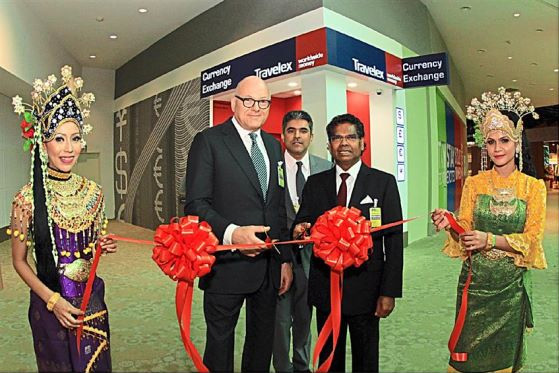 He said the opening of the BDCs would also bring in additional revenue to the country and taxable income for the government. It would also underline Malaysia’s stature as a prime destination for foreign direct investment and a country that has steadily risen in the World Bank’s ease of doing business index.

“These factors, as well as the country’s booming economic development, its central location in South-East Asia, high-quality infrastructure and expertise were also the reasons Travelex selected Malaysia as their South-East Asia hub,” Arumugam said.

Travelex has also opened an exchange centre in Johor Baru (City Square) and a commercial exchange centre in Kuala Lumpur (Menara Weld) to complement their existing northern regional centre in Penang. Another currency exchange centre will also be opened in Kota Kinabalu soon, making it a total of four centres in Malaysia over the last 18 months.

The one-stop currency exchange centre in Johor Baru caters to licensed money changers and banks in the state, Negri Sembilan, Malacca and in Singapore.

More importantly, it will give them an alternative, value-added option as a clearing house and allow them to buy and clear foreign currency with local wholesalers, said Travelex country manager Rakesh Aravind.

“Similarly our new currency exchange centre in KL would service our partners in the Klang Valley and become the service centre for the region,” said Aravind, adding that Travelex Malaysia would also be looking to expand to airports within Malaysia in the near future.

Travelex Malaysia aims to service 150 to 200 local partners by the middle of this year and double its growth every year in its first five years of local operations.

Lloyd said Malaysia’s role as the company’s regional base has also helps it look into expanding to Thailand and Singapore.

“We will be able to provide business services to these countries using the high-quality financial infrastructure and expertise available here,” he said. “We will also utilise Malaysia as our training and control functions centre for Southeast Asia.”

He added that apart from expanding in Southeast Asia, the group would also embark on their wholesale business in China, which would make it the first non-bank international company to obtain a wholesale license in that country.

Established in 1976, the Travelex group has earned a reputation globally of working with regulators to set the highest standards of integrity within the foreign exchange business. With over 1,200 retail stores globally operating in over 30 countries, Travelex is the world’s largest non-bank provider of foreign exchange services.

Read more on Banks and Currency Exchange Counters at the klia2