The total cost of klia2 is not expected to exceed RM4 billion and is on track to open on May 2 this year, said acting Transport Minister Datuk Seri Hishammuddin Hussein during a site visit yesterday. 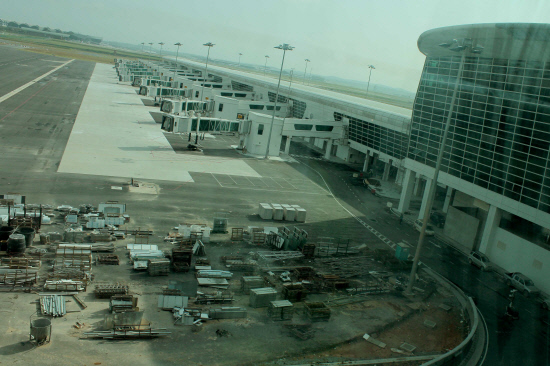 He said the final cost of the project will be revealed when the project is completed but does not expect the figure to exceed RM4 billion.

"We have certain bodies that are studying this (total cost of klia2). I know (the people are concerned about) the issue of cost and delays, but that will be explained at a more appropriate time. This visit today is to ensure everybody is working together and for them to assure me that what they have promised me earlier has been done, and I’m quite happy and satisfied with this visit. But for the next three weeks we have to pray hard," he told reporters.

He also said that the certificate of completion and compliance (CCC) is expected to be completed at the end of this month, while the operational readiness and airport transfer (ORAT) early next month.

Hishammuddin said that despite some hiccups along the way the project is now 98% complete.

When asked if he was confident that the contractors would be able to hand over the main terminal building by month-end, Hishammuddin said he is cautiously optimistic, acknowledging there was still a lot of work to be done.

The opening of the controversial hybrid airport has been delayed five times from its initial target in September 2011 and
has since saw its initial budget of RM1.6 billion skyrocketed to RM4 billion.

Commenting on reports that there was slippage of works at klia2, Hishammuddin confirmed that there were some delays and problems including certification from the fire and safety department and the coordination of immigration and customs.

"I acknowledged that there are some delays and problems but I’ve been given assurance that if they work together, that can be overcomed. I believe individually, the different sections of the development of klia2 is 98% ready but the biggest test is the integration and coordination of the operations and that requires third parties," he said.

He said the committee headed by Deputy Transport Minister Datuk Abdul Aziz Kaprawi had outlined certain timelines and bigger concerns which he may have to step in to resolve.

"But those are deadlines that I will let them follow through until such time that I’m needed. But yes, I am confident, cautiously, to the delivery of the timelines but there’s a lot of work to do," he added.

However, he declined to comment on the airport tax and passenger service charge for the new terminal.