Travellers from Ebola-hit countries will be issued with health alert cards while screening for the virus has been enhanced at major airports.

Health Minister Datuk Seri S Subramaniam said the health monitoring of the traveller would be carried out for 21 days from the date of arrival.

He said all arriving passengers would be screened for the Ebola virus via thermal imaging cameras which have been positioned at a spot where they have to pass.

"No one can escape the screening," he said in response to air travellers' claim of the lack of screening for Ebola at airports, particularly KLIA and klia2.

Dr Subramanian said he had instructed health officers at both airports to improve the process of screening of passengers.

On the issuing of the health cards, he said it was to enable those infected to receive immediate treatment at any of the 21 hospitals.

He said visitors who tested positive for Ebola would be sent for quarantine at the Sungai Buloh Hospital in Selangor, Queen Elizabeth Hospital in Kota Kinabalu, Sabah and the Sarawak General Hospital in Kuching.

"Another measure is to conduct health screening on all visitors from the affected countries at all our international entry points, by stationing 150 health workers there, like what is being done at KLIA and klia2 now." 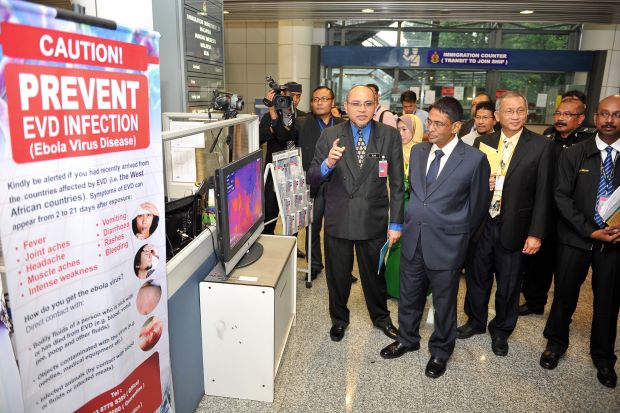 Dr Subramaniam said although Malaysia has no direct flights from countries hit by Ebola, the immediate measures taken by the ministry showed the government did not take lightly the report by the World Health Organisation (WHO) on the rising number of Ebola cases.

"The ministry will continue to work closely with all the relevant agencies to boost our preparedness and response to the potential spread of the disease here," he said.

Up to last Saturday, 10,114 Ebola cases with 4,922 deaths were recorded but until now, WHO has not issued any warning for people not to travel to the affected countries like Guinea, Liberia and Sierra Leone.