Ambank (M) Bhd has opened its first full-service branch in an airport and first Bureau de Change (BDC) in the recently opened international low-cost airport, klia2, to tap into the 25 million visitors expected to pass through the terminal each year.

The branch, which has been operating at the airport for two months, had exceeded customer-volume projections by160%, with strong transaction numbers, particularly for currency exchange, said Paul Lewis, AmBank retail banking managing director.

Lewis added that the bank was planning to open another three to five more branches over the next 12 to 18 months.

“We are looking at new branches as well as repositioning some of our existing branches with a new look and upgraded facilities. This means some of our current branches may be relocated to increase visibility,” he said. 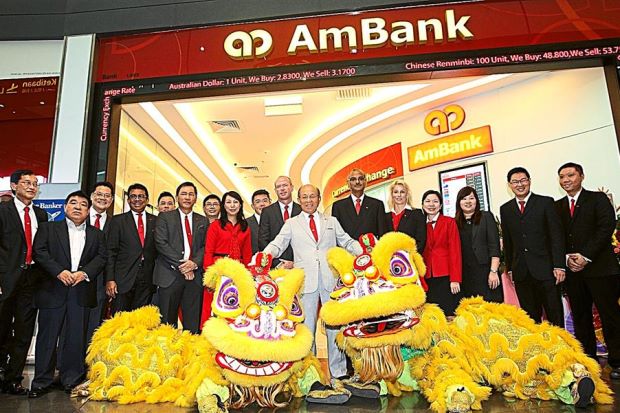 Ambank at the klia2

Located on level 3, klia2, the new branch and BDC occupy a total space of about 1,104sq ft, with six 24-hour self-service machines.

The BDC offers currency exchange service of up to 29 currencies and is open 24 hours. Among the services offered include Internet banking kiosks, automated teller machines and cash deposit machines.

The branch is AmBank’s 179th in Malaysia. The average investment for each branch ranges from RM800,000 to RM1mil but Lewis said the one at klia2 exceeded the RM1mil benchmark.

AmBank Group chairman Tan Sri Azman Hashim said the group was looking at more possible openings in airports as he noted that airports were “a location treasured by banks”, and visibility in this space was important.

Azman explained that the full-service branch in klia2 would not only provide convenience for travellers but also to regular shoppers.

Commenting on the bank’s overall loan growth, Azman said: “The banking industry is very competitive and very much dependent on the economy. The economy is expected to grow at about 5% and the banking system should grow in line with that,” he added.

Read more on Banks and Currency Exchange Counters at the klia2