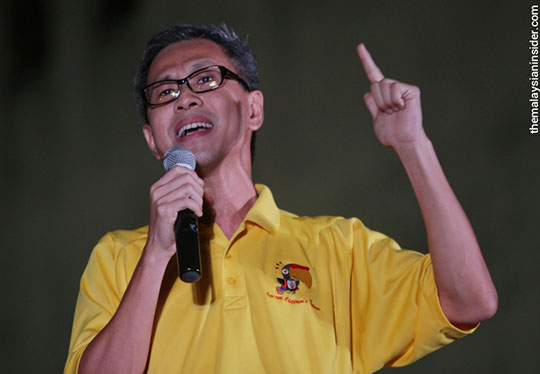 Tony Pua accused Bashir, who has led the listed firm MAHB for nine years, of failing to manage the klia2 project competently.

Malaysia Airports Holdings Bhd (MAHB) should take full responsiblity for the repeated delays on the klia2 project which had ballooned in cost, DAP’s Tony Pua has said when commenting on the “explosive blame game” between the airport operating firm and its contractors.

The DAP publicity chief pointed out that MAHB has said that it will impose liquidated and ascertained damages (LAD) on the contractors who had allegedly caused the delays with their non-delivery of parts of the project, but cast doubt on the claim that the contractors were to be blamed.

klia2’s main contractors had denied the claim and instead blamed project owner MAHB “who allegedly made repeated variation orders to the original contract”, Pua said.

“While we are not privy to the details of the dispute which is now triggering the blame game between the various parties, the question that needs to be asked is, after nearly 2 years of delay, why is it that MAHB is only coming out for the first time to blame the contractors?  If it is really the contractors who are at fault, why haven’t they been penalised with the LAD since September 2011?” Pua asked in a statement today.

“At the end of the day, the buck stops with MAHB as the project manager and owner and the entire top management of MAHB must bear full responsbility for embarrassment and fiasco,” the Petaling Jaya Utara MP later added.

Pua said MAHB’s managing director Tan Sri Bashir Ahmad’s contract should not be renewed when it ends this month, noting that it was extended last year.

He accused Bashir, who has led the listed firm MAHB for nine years, of failing to manage the klia2 project competently.

“A competent successor must immediately be found to clean up the mess in MAHB to ensure that there are no further delays to the completion of the airport as well as capping the cost to taxpayers for the project,” Pua said.

He noted that the airport’s cost had jumped from less than RM 2 billion to RM4 billion, saying it was an irony for MAHB chief financial officer (CFO) Faizal Mansor to be named the Best CFO for Investor Relations (Mid Cap category) by the Malaysian Investor Relations Association (MIRA).

“This drastic increase in cost has resulted in MAHB having to raise bonds amount to RM3.1 billion to date, with another RM1 billion expected to be raised in the near future, causing MAHB to take on debt which may not have been necessary in the first place.

“However, the ultimate losers on the “low cost” airport which busted the budget will be the Malaysian travellers who will have to bear the cost of higher airport taxes for MAHB to repay its debts. This will also severely impact Malaysia’s competitiveness as the hub for low-cost carriers in the Asia region.

Pua also urged the government to release audit firm KPMG’s independent report on the klia2 project, having noted that the airport’s cost had jumped from less than RM2 billion to RM4 billion.

“We call upon the Ministry of Transport to make public the report given the scale of the scandal and the public interest involved.  All those found guilty of negligence must be brought to book.”

Yesterday, Bina Puri Holdings Bhd’s executive director Matthew Tee Kai Woon reportedly said the UEM-Bina Puri consortium would not have to pay MAHB any LAD, claiming that the delays were due to the numerous changes made to the klia2 project, with MAHB having differing opinions with companies using the low-cost carrier terminal (LCCT).

Tee said that UEM-Bina Puri had asked for an extension of time on the project until this September or October, state news agency Bernama reported.

But Bernama reported on the same day that MAHB said the LAD will still be imposed on contractors who had not fulfilled their obligations under the contracts for the klia2 project.

Last Monday, Pua and PKR’s Lembah Pantai MP Nurul Izzah Anwar listed four demands on Prime Minister Datuk Seri Najib Razak and his new government, including the final bill from MAHB for klia2’s cost, the actual deadline for the project, a meeting with the new acting Transport Minister Datuk Seri Hishammuddin Hussein and an independent audit on the entire project.

Najib had announced in January this year that the klia2 terminal would be completed by May but this was subsequently delayed to June 28.

In a filing to Bursa Malaysia two days after the May 5 election, MAHB admitted that contractors were unlikely to make the June 28 deadline.  On May 9, MAHB chief financial officer Faizal Mansor told Bernama that the deadline would be pushed back indefinitely.

In a Bernama report on May 9, RHB Research analyst Ahmad Maghfur Usman said that the delay to the airport’s completion date would likely go on for as long as six months.

“Even if the new terminal can be completed by September after a two-month delay, MAHB would still need to carry out operational trial runs, that may require at least four months,” he was quoted saying.

Some 10 airlines have committed to operate from the new klia2, which was mooted to cater to the growth in demands for low-cost travel.

klia2, which is expected to cater to 45 million passengers per annum, will have 60 gates, eight remote stands and 80 aerobridges, and a 32,000 square metre retail space with 225 outlets.