The delays plaguing the completion of klia2 is the result of the non-delivery of parts of the project by contractors, leadingMalaysia Airports Holdings Bhd (MAHB) to come out to say that it would impose liquidated and ascertained damages (LAD) on the responsible parties.

While MAHB did not reveal the amount of the LAD being sought, sources told StarBiz that it amounted to some RM4mil to RM6mil for every month of delay. 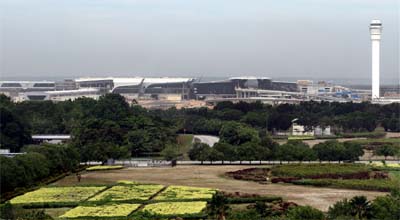 klia2’s first targeted date of completion was September 2011, but it isn’t clear what period of time the LADs are being claimed for.

Sources also told StarBiz that the UEM Group was one of the contractors affected.

Failure to open the airport on June 28 would mean a fifth delay in the opening of what has been touted as Asia’s biggest low-cost carrier terminal, or LCCT, that can cater to 45 million passengers.

Sources also said that while the airport was about 92% complete, the terminal building had not been fully completed by the contractor a UEM-Bina Puri joint venture. 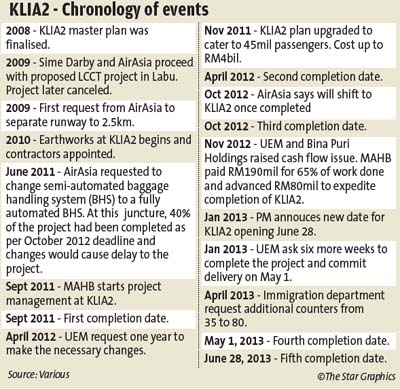 “Some of the works cannot be finished because the terminal is not completed, and some works would coincide with the completion of the terminal,” said a source.

MAHB told Bursa Malaysia that its board had met yesterday and had decided to impose the LAD on the respective contractors and pursue any other recourse available to it under the contract.

It added that “the board had taken note of the contractors’ notification that they were unable to meet their contractual obligations for the opening of klia2 on June 28”.

No new date has been announced and MAHB in the statement stated that the “contractors have requested for time to revert with a revised date”.

A source revealed that MAHB had committed to the June 28 opening because UEM had promised to deliver the completed terminal on May 1. However, two weeks ago, MAHB said even that deadline could not be met because the contractor was not able to complete the work on time.

Any further delay in the opening would mean that the airport can only be opened next year, leading to analysts expressing concern about the impact these delays would have on MAHB.

MAHB has been criticised by various quarters for the delays. The worry also has been that there would be significant cost overruns.

AirAsia Bhd is expected to be the anchor tenant at klia2 and its owner,Tan Sri Tony Fernandes, had since mid-last year warned that klia2 could turn out to be an expensive “black hole” due to poor decisions made by MAHB in 2009.

UEM senior officials contacted yesterday declined to comment, while Fernandes could not be reached.

The original plan was to build a terminal to cater to 20 million passengers at a cost of RM2bil, but since the growth of low-cost air traffic has been mushrooming in Asia and the fact that there had been requests made by airlines and other relevant parties for a bigger airport and facilities, MAHB decided to build an airport to cater to 45 million passengers instead at a cost of RM4bil.

Now, with the delays, talk is that the cost of building the airport could balloon to RM5bil.

“Though MAHB is seeking damages for late delivery, which is a step in the right direction, it should have also been more transparent in telling the market the issues it was facing with the contractors, and the numerous requests made by airlines that had changed parts of the plan,” commented a source, adding that in January this year, an airline had already made a request that would inevitably lead to some changes in the plan and a delay in the completion of the airport.

Earlier reports stated that a year’s delay would mean MAHB having to fork out cash reserves of RM774.2mil, which could likely mean it would distribute a slightly lower dividend.

Another analyst expects the delay of klia2’s opening to affect MAHB’s earnings in the coming year.

However, other insiders reckon that the cost of klia2 to be borne by MAHB is “well contained within the RM4bil”, and that MAHB had adequate finances in place to fund the project.