Malaysia Airports Holdings Bhd (MAHB) has appointed a new contractor to complete the klia2 baggage handling system job at RM20 million more than the original cost of the remaining work to be completed. 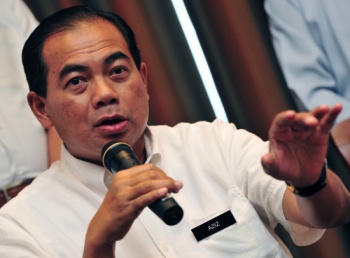 Malaysian AE Models Holdings Bhd had on Aug 3, 2013 told Bursa Malaysia that the UEM-BinaPuri joint-venture – the main contractors of the klia2 terminal – had terminated its subsidiary Matromatic Handling Systems (M) Sdn Bhd’s services. No reason was stated in the announcement.

Deputy Transport Minister Datuk Abd Aziz Kaprawi, who heads the taskforce to ensure the completion of klia2 on April 30, 2014, yesterday said the termination was due to the financial difficulties Matromatic was in.

Matromatic was put under receivership on July 10 for failing to meet its loan repayment obligations.

"So they (BCS) are catching up (on remaining work for the baggage handling system), and there is no problem to complete as per schedule. The (contract sum) has increased slightly because (the award to Matromatic) was (done) two to three years ago and the (contract award) now has to be based on current price," Hamid said.

Aziz concurs, giving assurance that the change in contractors would not affect the deadline for the completion of klia2.

"No further delays are expected because I am observing every now and then, and it seems after making several personal visits, the contractos are taking the matter seriously and putting more workers on the job," he said, adding that test-landings for runway 3 due in the last week of September.

Aziz was speaking at a press conference held after his site visit to klia2 and a meeting with members of the ministry’s taskforce here yesterday. The entire project is 92.5% complete, while the terminal itself is 96% done.

On whether more cost increases are expected, Aziz said the ceiling for klia2 has been set at RM4 billion but the focus remains on completing the project according to schedule.

"We are confident that cost will be roughly, plus or minus, RM4 billion. (This) is because we haven’t come to the final account," he said.

Aziz also said the taskforce is not investigating the incidences which have contributed to the delay in the opening of klia2 thus far, but instead is focusing on ensuring that no further delays occur.

To date, MAHB has raised RM3.1 billion to fund the development of klia2.

While MAHB CFO Faizal Mansor confirmed that the airport operator is looking to raise another RM1 billion to fund the project, he said the method of financing has not been finalised.

A report over the weekend stated that MAHB was looking at issuing perpetual sukuk to raise the remaining RM1 billion it needs.

Faizal, when met by reporters after the briefing, said MAHB remains committed to maintaining its AAA rating. MAHB has to maintain a gross gearing ratio of 1.0 time to sustain its AAA rating, which currently stands at 0.7 times.

Faizal said that another RM1 billion bond issuance now would bring it up to just about 1 time.