KUB Malaysia Bhd said yesterday Malaysia Airports Holdings Bhd (MAHB) has not revoked its contract for the Kuala Lumpur International Airport 2 (klia2) project in Sepang, Selangor. The company was responding to a report issued by the research unit of Maybank Bhd.

“KUB Builders was reported to be behind schedule in its contract to build the runway and taxiway.

MAHB had no choice but to take ownership of this portion of work and pass it to other able contractors to finish the job,” Maybank Investment Bank research analyst Mohshin Aziz wrote in a report this week.

KUB Builders, a unit of KUB Malaysia, was awarded a RM268.8 million contract in October 2011 to build the 3.96km third runway, parallel connecting taxiways and other associated work at the new low-cost carrier terminal.

“It is not true. MAHB did not revoke KUB’s contract on klia2. If it did, why are we still there doing our work and discharging our contract obligations?” he told Business Times via email. 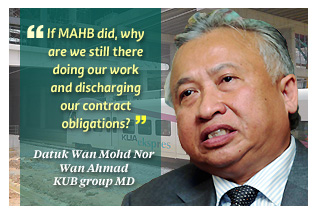 Wan Mohd Nor said KUB Builders is on target to finish its work, with 80 per cent already completed to date.

Contractors involved in the klia2 project have come under fire for delaying the airport’s opening.

The opening of klia2 has now been delayed for the fourth time.

It was supposed to open on June 28 but may now only begin operations next year.

Meanwhile, WCT Bhd, which is building the RM530 million “Gateway@klia2” complex, said it is not among the contractors delaying the airport’s opening.

“The opening of gateway@klia2 will be concurrent with klia2,” said a company spokesperson.

Gateway@klia2 comprises a transportation hub for taxis and buses, a commercial building with a net lettable area of 350,000 sq ft, and car parks with up to 6,000 bays.

WCT and MAHB hold a 70:30 equity interest, respectively, in the concession for gateway@klia2.