Malaysia Airports (MAHB) has finally conceded that the klia2 project is severely delayed has the new date set is 12 months later than the last confirmed completion date at 30 April 2014. 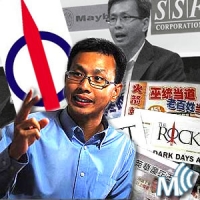 It was only on 8 March 2013 when Faizah Khairuddin, the MAHB general manager told the press that “the new low-cost carrier airport, klia2, will be ready by May 1 (2013), although its opening date has been deferred to June 28?as the later date was only set to commemorate the inauguration of the Kuala Lumpur International Airport 15 years ago – the period would be utilised to perform testing, mock operation drills and commissioning activities.”

MAHB had reiterated as late as 28th March 2013 that the klia2 project was “on schedule” which meant completion by 1 May 2013.

However, MAHB finally conceded that the project was delayed after persistent pressure from Pakatan Rakyat elected representatives 3 weeks ago, and it was announced late yesterday that the project has been extended by a shocking 12 months.

I had joked during my 27 May press conference with Nurul Izzah Anwar, MP for Lembah Pantai that I would not be surprised if the new “low-cost” klia2 will only be officially launched on 28 June 2014, to commemorate not the 15th anniversay of KLIA, but the 16th. But even I am shocked at how close to the mark I was on the prospective new opening date (And I may still be spot on yet).

The new opening date does not tally with all the stories that MAHB and the contractors have been telling Malaysians over the past one year.

The new 30 April completion date will also mean that UEM-Binapuri will be required to pay a total of RM63.4 million in liquidated and ascertained damages (LAD) or RM199,445 per day for 318 days commencing 16 June 2013. The UEM-Binapuri contract is worth RM997.2 million, which commenced in August 2010. As of yesterday, Binapuri has already disputed the LAD claims, placing the blame for the delay on MAHB.

Clearly the entire story does not add up and MAHB must come clean with the real story behind the massive delay of the airport since its first scheduled completion in September 2011. Not only has the airport been delayed by 31 months, the airport has also busted its budget of RM1.7 billion to its current total of RM4 billion today.

What else is not right at klia2

Given the mysterious 12 month extension to the klia2 deadline, Malaysians want to know what is the exact status on other related projects in klia2 which affects the operatability of the airport? In particular, have all the other projects such as the control tower, aircraft aprons and the third runway all been completed as at 30 April 2013?

In fact, the main contractor for the RM268.8 million 3rd KLIA runway, KUB Malaysia announced on 8 June that the runway is only 80% completed. Then the question that needs to be asked then is why is the LAD action taken only against UEM-Binapuri with “only” 7% of the project left to be completed, when no action is taken against KUB when 20% of the project has yet to be completed as admitted by KUB themselves?

There is certainly a lot more dirt than it meets the eye at the RM4 billion mega-scandal at klia2 and MAHB must stop lying and hiding the truth from Malaysians as they have done over the past 2 years. The Ministry of Transport, with its Secretary-General, Datuk Seri Long See Wool who is himself a director in MAHB must demand full accountability and transparency to ensure that those responsible for the misdeeds are brought to book.

Tony Pua is the MP for PJ Utara