KUALA Lumpur is set to play a larger role as an aviation hub in Southeast Asia in the next seven years, say analysts.

klia2, which is due for opening on May 2 next year, is built to handle up to 45 million passengers per year.

KLIA and Subang Skypark handled some 42.3 million passengers in 2012. The numbers are set to rise in the coming years with the klia2 completion.

“We see upside to our passenger forecasts, as growth will be fuelled by AirAsia Bhd? new hubs in Penang, Kota Baru and Kota Kinabalu, which are enjoying strong take-ups,” the research firm said recently. 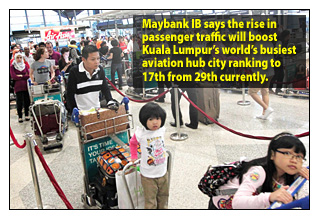 It added that Kuala Lumpur could potentially be ahead of Hong Kong and Singapore as a key regional hub due to its strategic location and airport infrastructure.

In terms of airport infrastructure, KLIA will have a third runway ready by May next year.

“This will boost its total capacity (in terms of passenger traffic) to 72 million per year and ensures uninterrupted traffic growth over the long term.

“Kuala Lumpur has traditionally been an important aviation hub due to its strategic location in Southeast Asia, but more than this are the benefits of aggressive growth ambition of the local airlines, supportive government policies, low-cost operations and adequate infrastructure,” Maybank IB said.

However, Maybank IB said all these hubs are matured and experiencing low traffic growth rates.

It added that Beijing could take the top spot, followed by London and Shanghai, by 2020. In Southeast Asia, however, Bangkok and Jakarta are the current leaders, followed by Kuala Lumpur and Singapore.

RHB Research said this is due to Malindo Air being less aggressive in spreading its wings due to its high cost structure. At the same time, the airline also focuses on expanding its regional routes, such as to Indonesia, India and Thailand, rather than compete for the local market share.

It added that MAS and AirAsia will benefit from Malindo’s regional expansion strategy should they maximise yields and loads.

Maybank IB said Kuala Lumpur has long suffered from an identity crisis in terms of appeal and existence, pointing out that the city was once always sidelined over Bangkok and Singapore as the Southeast Asian destination.

"Over time, this has led to an explosion of new routes, flight frequency and comprehensive connectivity," it said, adding that Kuala Lumpur boasts the highest LCC route connectivity and frequency in Asia, thus earning the status as the premier LCC hub in Asia.

Indeed, KL is starting to become more appealing as a hub in the aviation world.

The local sector is getting a big boost from the government’s plans to transform Malaysia into an aviation hub in the region via a national aviation policy.

The blueprint is being formulated to strengthen the sector’s ecosystem and services network.

The government has also introduced policies that are supportive towards the industry. For example, Malaysia is known to have the cheapest airport charges (landing and parking, over flight, passenger service and security charges) compared to Singapore, Bangkok, Jakarta and Manila.

Maybank IB noted that KLIA’s fuel cost is the second lowest in the region, after Brunei.

"Overall, KL’s operating costs are very competitive, and this helps in the development of the aviation hub and promotes it as the gateway to Southeast Asia," it added.

Kuala Lumpur is expected to handle more passengers next year due to the Visit Malaysia Year (VMY) 2014.