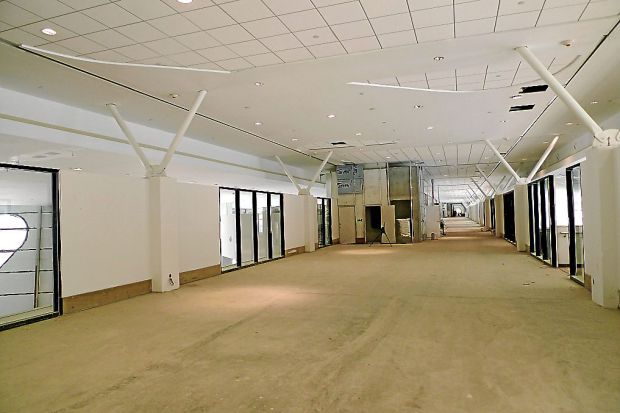 A huge sign on the control tower of klia2 in Sepang proudly proclaims that it was constructed “in 10 months”. However, the contractors apparently forgot about the rest of the project.

The completion of the airport has been delayed five times and many doubt that the contractors can meet the new opening date of May 2, 2014, as announced last month by Malaysia Airports Holdings Bhd (MAHB).

The Starprobe team which spent a week at the site found good reason for the scepticism.

Among the features yet to be completed is a 300m skybridge for pedestrians, the first of its kind in Asia.

Contrary to claims that construction had been sped up and was going on round the clock and seven days a week, the team found that work was actually being done at a normal pace.

It found that the pace was even slower on weekends with hardly any movement of machinery and few workers at the site.

The construction of the main terminal of the building appeared to be only about 60% completed.

The building will house the departure and arrival halls as well as the immigration checkpoints and a train terminal.

The internal roads linking the main terminal to the other parts of the airport have yet to be built.

The cost of klia2, which had started off with a price tag of RM1.9bil, has ballooned to RM4bil.

In June 2011, MAHB accused AirAsia, the main airline for klia2, for the delay, citing the airline? request to raise passenger capacity to 45 million a year from the earlier planned 30 million.

MAHB said the low-cost airline had also declined to use aerobridges, citing high operating costs, and also decided at the last minute to switch from a semi-automated to a fully-automated baggage handling system.

It added that the realignments had pushed the completion date of the new terminal to April 2013. Early this year, it was announced that klia2 would be launched on June 28.

The main contractors, a UEM-Bina Puri joint venture, and the airport operators have also been blaming each other for the delay.

However, the team found that several key features of the airport had already been completed.

Among them are the klia2? control tower and the two ramps linking the airport to the KLIA extension highway.

Security checkpoints have been placed at the entrance and exit of the ramps to stop unauthorised vehicles from entering the construction site.

The construction of the runways along the aprons also appeared to have been completed with tarring having started on the runways.

According to reports, the initial delay was caused by the alleged non-compliance to the standards required by LCCT.

MAHB has also been blamed for the delay since the project is entirely undertaken by the company.

According to an inside source, the work on the project was now taking shape at a faster rate than it was a few months ago.

He said the major issue with the project was the instability of the earth in the area.

“The situation required reinforcement work including additional piling which had caused a considerable delay.

“More time was also taken up because the conveyor belt could not be fitted into the building because of the design.

“A section of the building at the baggage claim area had to be reconstructed to fit the conveyor belt,” he added.

Meanwhile, an international expert from the construction industry said the airport could be completed by April 30 next year only if work was carried out at a much more rapid pace.

“Intensity is the key to the completion of the project,” he said.

“From outside, the terminal building looks very raw. However, a lot of things can be done in 10 months provided the remaining work is carried out with greater intensity,” he said.