AirAsia Bhd, which will be the biggest user of klia2, is disappointed with the delay in opening the new low-cost carrier terminal (LCCT) said CEO Aireen Omar. The new LCCT was scheduled to open later this month.

Aireen, who took over the helm from Tan Sri Tony Fernandes in June last year, told the media yesterday the airline hopes to receive further updates from Malaysia Airports Holdings Bhd (MAHB) on when klia2 will be fully operational.

“We are very disappointed with the latest delay. We will work closely with MAHB so that a new launch date can be set for klia2.”

Aireen said AirAsia will have to continue operating from the existing LCCT, which has exceeded its capacity.

“It’s not going to be comfortable for passengers as the LCCT copes with overcapacity,” she told the media after AirAsia’s AGM yesterday.

The existing LCCT has a passenger capacity of 15 million per year. Some 20 million passengers passed through the terminal last year.

The RM4 billion klia2 project has been riddled with delays and problems. MAHB announced earlier this year that its June 28 launch date had been scrapped due to the project’s contractors being unable to meet their obligations in time.

Bina Puri Holdings Bhd, one of the contractors for klia2, acknowledged that the delay was caused by indecisive moves by both MAHB and AirAsia with regard to the design of the terminal and the facilities to be installed. 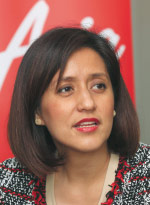 Aireen: It’s not going to be comfortable for passengers as the LCCT copes with overcapacity.

“There were a lot of changes being made to the design of the airport, like whether or not to include the passenger aerobridge. AirAsia didn’t want it while MAHB wanted to include it. So for us as contractors, while waiting for decisions to be made, all we could do was wait,” Bina Puri executive director Matthew Tee told the media yesterday.

Sources familiar with the project revealed that AirAsia had initially not wanted to install an automated baggage handling system at klia2 as the low-cost carrier had planned to continue with its current system of manual baggage handling at the new terminal.

AirAsia, however, later agreed with MAHB that it was necessary to install an automated baggage handling system. And the baggage system alone has caused a one-year delay as contractors needed to re-construct part of the terminal. Besides that, AirAsia had also requested for more aircraft stands as well as a longer runway for jumbo jets to land.

Parties involved in the klia2 project, including MAHB, seem to be playing the blaming game since the announcement that the new terminal would not be opened this month. 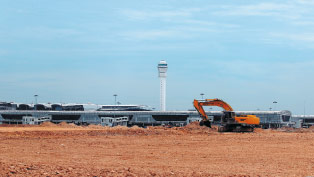 This picture taken on May 29 shows the progress of the construction of klia2. The cost of the new terminal has doubled to RM4 billion from RM2 billion and its opening has been delayed five times.

The klia2 project, tendered out back in 2009, entails 37 packages. Its original completion date was September 2011 but this has been revised several times since.

The klia2 is expected to handle 45 million passengers per annum. The low cost terminal will have 60 gates, eight remote stands, and 80 aerobridges. Its retail space encompasses 32,000sq m which will accommodate a total of 225 retail outlets.

The key delay has been the construction of the main terminal buildings, a 60:40 joint venture between UEM Construction Sdn Bhd and Bina Puri, according to executives familiar with the project.

Last Wednesday, MAHB announced that it would impose liquidated ascertained damages on the responsible contractors that had caused the delay.

But some quarters have also pointed out being the project manager, MAHB also had a duty to keep the project on track.

This article first appeared in The Edge Financial Daily, on June 5, 2013.