BEEFING UP SECURITY: They will be temporarily placed in KLIA to familiarise themselves with its operations

Its chairman, Tan Sri Wan Abdul Aziz Wan  Abdullah, said the new policemen would be tem porarily placed at the Kuala Lumpur Inter national Airport (KLIA) here to go through a preparation programme that would familiarise  themselves with airport operations at the airport.

“Once  the new low-cost airline hub, klia2,  is ready and opened, these officers will be stationed  there,” he said at the police officers?grad uation ceremony yesterday.

Wan Abdul Aziz said the safety and se curity of  airports had always been the main priority  with the increasing number of passengers annually.

“In line with the needs of the aviation in dustry which is becoming more challenging by day and the increasing needs from our consumers, we realise we havethe need for us to constantly improve the level of our  services to meet their needs. With airports being the main entry  points into the country, we have placed great importance on  the security and safety of passengers. The  recruitment of these officers will beef up the existing  security measures.” he said.

Wan Abdul Aziz added that with the new recruits, MAHB was now one  of the organisations in the country with the  highest number of auxiliary policemen at  3,600 personnel. 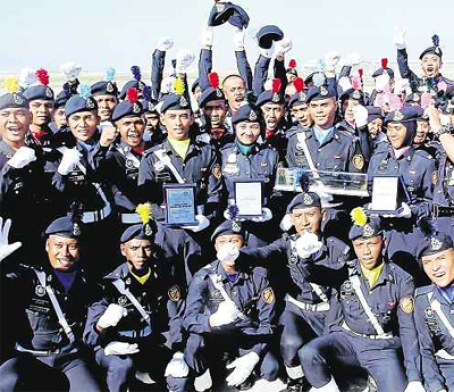 Some of the auxiliary police officers celebrating their graduation in Sepang yesterday.