Its aim is to consolidate its entire business structure to offer better value to shareholders.

IT is no secret that YTL Corp Bhd intends to take its remaining listed subsidiaries private after having done so with its cement unit a few months ago.

The plan is just part of an ongoing restructuring exercise to consolidate the group’s entire business units under a single listed entity that will give shareholders attractive dividend yields. The name of the game, as some market observers put it, is to unlock the true value of YTL Corp by plugging the cash-flow leakages to its subsidiaries. 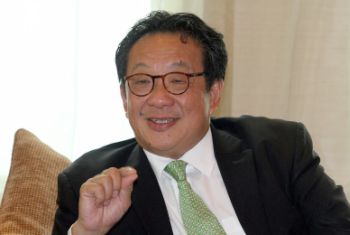 Yeoh: ‘We are continuously looking for long-term business opportunities that offer stable and good returns’.

And such a move is expected to eventually boost the profile of the integrated infrastructure conglomerate with the investment fraternity.

In an exclusive interview with StarBizWeek, YTL group managing director Tan Sri Francis Yeoh concedes that the group has already put in various forms of instruments such as irredeemable convertible unsecured loan stocks, or Iculs, to facilitate the plan.

“It is just a matter of timing we would do it faster if the opportunities present themselves for us to do it in that manner,” Yeoh says candidly, as he settles down to the conversation.

Yeoh has just returned from a business trip from Europe whenStarBizWeek met him that day. Yet the 58-year-old tycoon looks as fresh and energetic as ever as he talks about the direction that his team has set for the YTL group.

YTL Corp’s inability to pay good dividend yields in the past, according to Yeoh, is mainly attributable to “leakages” in the form of dividend payouts at subsidiary levels.

“We have regularly leaked much dividend to our subsidiaries; if some of the subsidiaries are privatised, we would be able to plug the leakages, and hence, afford higher dividend payments at YTL Corp,” Yeoh explains, reiterating his vision to make YTL Corp a major dividend yield play, offering a net dividend yield of at least 5% per year over the next 10 years.

“As it is, there is already a conglomerate discount on YTL Corp. But if it could pay higher dividends, the discount will narrow and hence draw better valuations to its share price,” an analyst says.

Earlier, the privatisation of YTL Cement has already led to an upward re-rating of YTL Corp’s shares, as the exercise seems to have resulted in improved liquidity and dividend payouts of the latter.

By Yeoh’s own admission, the YTL group does not have many sensational stories that could excite the market. But when it comes to the fundamental things that truly matter stability and growth the YTL group would strive to keep offering that to its investors, he says.

The YTL group’s businesses at present are mainly driven by long-term concessions that generate stable cash flow and profits. This, as Yeoh points out, will bolster the group’s ability to stick to the proposed dividend payout for the next 10 years.

“As a group, we will definitely do well,” he asserts.

It is clear that complacency is not in Yeoh’s dictionary. The YTL group, he reveals, will continue to focus on growing its businesses to broaden its bottom line.

The strategy will be the same as what it has successfully been applying over the years a two-pronged approach, with one focusing on organic expansion and another on mergers and acquisitions (M&A) activities.

“We are continuously looking for long-term business opportunities that offer stable and good returns,” Yeoh says, adding that the group would make use of its huge cash pile to undertake M&A activities.

YTL Corp’s cash balance as at June 30, 2012, stood at RM14bil. The group has been hoarding its cash since its last acquisition of three Marriot hotels in Australia for A$400mil (RM1.27bil) in May this year and the famous ski resorts Niseko Village in Japan for US$60mil (RM183mil) two years ago.

Market observers seem convinced that YTL Corp is in a strong position to undertake M&A given its huge cash pile, and, in fact, some of them have been expecting something to happen soon.

But for the YTL group, patience is key when waiting for good deals to come by. It will, therefore, not simply rush into anything.

According to Yeoh, even if there were no good deals in the horizon, the group could still invest in its existing businesses and grow organically.

But when viewed from a longer-term perspective, one can see that the YTL group has been maintaining a steady and healthy growth trend.

Indeed under Yeoh’s stewardship, the YTL group has been charting an exponential growth path.

Having been at the helm since 1988, Yeoh has transformed YTL Corp from merely a single-listed entity, focusing on the local market then, into an international conglomerate, with several listed entities, and a presence spanning across Asia-Pacific and Europe.

Today, more than 70% of YTL Corp’s group revenue and earnings are derived from its overseas businesses.

The group’s business focus has also expanded over the years from merely construction and property development to include a wider scope of engineering science such as infrastructure development, utility (power and water) and information and communications technology.

“Our passion is clearly manifested in all the things that we do,” says Yeoh, who is of a civil engineering background.

In his line of business, Yeoh stresses, there is no room for error.

“Engineering is a precise science. We do not have the luxury of speculation or guessing we’ve got to get it right (from the early stage of planning),” Yeoh explains.

“When we sign off on the drawings of any project, we really put our names behind it, and take responsibility for its quality and sustainability,” he adds.

Undeniably, the YTL group has in recent years played a key role in transforming the landscape of the Klang Valley. Among its notable works include the revitalisation of the Bukit Bintang and Sentul areas.

The 2.15km project, which costs about RM100mil, is due for completion by the end of this year, with commercial operations expected to start in April 2013 when klia2 opens.

According to ECM Libra research analyst Benjamin Lee, the ERL annual ridership could double from four million passengers as at the end of 2011 to nine million next year when the klia2 starts its operation. Lee’s estimation is based on the assumption that the ERL’s ridership is pegged at about 11% of KLIA and klia2 airport passenger traffic, which could reach about 85 million next year.

Express Rail Link Sdn Bhd, in which YTL owns a 50% stake and Lembaga Tabung Haji owns 40%, is the concession holder for the KLIA Express and KLIA Transit services on the ERL, which links the country’s main international airport with the city’s transportation hub in KL Sentral.

The existing 57km ERL, which was also built by a consortium involving SPYTL, currently holds the record of being the cheapest-built high-speed rail in the world.

Completed in 2002, the ERL was estimated to have cost only RM35mil per kilometre (km). That’s way below the international average cost of around RM150mil per km for similar rail projects.

And at RM35, the standard fares per person for a single journey between KLIA and KL Sentral on the ERL have remained unchanged for the past seven years, yet the business remains a profitable one for the YTL group.

For Yeoh, it is simple the YTL group makes every effort to be efficient and innovative in its approach to business. Its focus is to do the right thing at all times to ensure that the end result of its activities would add value to the lives of the people.

The mantra of the YTL group, as Yeoh puts it, is “produce world-class product and services at third-world prices”.

The next high-profile infrastructure project that YTL has set its eyes on is the proposed multi-billion high-speed rail project that will link Kuala Lumpur and Singapore.

First mooted by Yeoh in the late 1990s, the KL-Singapore high-speed rail project has been postponed many times in the past due to several factors such as the 1997/98 Asian financial crisis and the project’s exorbitant costs.

Efforts to revive the project never came to fruition until 2010, when the project was named as one of the entry point projects under Malaysia’s Economic Transformation Programme.

The KL-Singapore high-speed rail project, which could potentially cut travelling time between the two important financial centres of Southeast Asia by half to about two hours, is currently still in feasibility-study phase; this is expected to complete by the end of this year. Pre-qualification bids for the project are likely to be called by mid-2013 if it passes the feasibility test.

Yeoh says the YTL group would definitely participate in any potential bid for the KL-Singapore high-speed rail project, which he thinks will benefit the economies of both Malaysia and Singapore.

“The positive effect of this type of train system is well-documented globally,” Yeoh says.

Some analysts reckon that the YTL group stands a good chance to win at least a portion of the works for the KL-Singapore high-speed rail project.

“As YTL was the original proponent for the project, it would not be surprising if it bags a (project delivery partner) role for the project,” ECM Libra’s Lee notes in a report.

Yeoh acknowledges that the current global economy has presented an increasingly challenging environment for many businesses including that of the YTL group.

But Yeoh maintains his confidence that the group will be able to tide through the challenges.

“We believe that even in the worst of times, there will still be some businesses. It is just a matter of adjusting, and using our skill set and intellectual capital to re-invent new products that the market wants,” he explains.

On a more positive note, Yeoh reveals that the group at present still has RM25bil worth of development projects in the Klang Valley that have yet to be developed, and these are alone will keep the company busy for a few more years to come.