“We have proven that our policies do not destroy the economy but have made Selangor and Penang the top investment destination for foreign investors,” the opposition party’s economic expert said in a statement today.

Pua (picture) was responding to the prime minister’s remarks yesterday that PR’s economic reforms and promises were for the “short term” and were “a recipe for economic disaster.”

“It is Barisan Nasional (BN), if given the opportunity to continue ruling the country, which will continue to impoverish the rakyat to enrich the cronies with vested interest via lucrative contracts and privatisation concessions,” the Petaling Jaya Utara MP said.

Last year, Penang recorded RM10.5 billion in total investments while Selangor was reported to have drawn RM5.2 billion in the first half of 2011. Malaysia’s overall investment amounted to RM31 billion.

Pua urged the PM against making “wild and unfounded allegations”, reminding the latter of his minister Datuk Seri Idris Jala’s warning that resource-rich Malaysia would be bankrupt by 2019 if the BN government continued its existing economic policies.

He pointed out that the sovereign debt to gross domestic product (GDP) ratio had gone up to 53 per cent, placing Malaysia’s debt at RM462 billion. Pua said this was a result of 14 consecutive years of budget deficits.

He said he was alarmed to learn that the country had lost RM150 billion through illicit outflows in 2009 and incurred more than RM1 trillion losses since 2000, highlighting a recent report from a US-based financial watchdog, Global Financial Integrity.

Moving from the backfoot, Pua attacked Najib over the series of financial scandals linked to various BN ministers now coming to light. 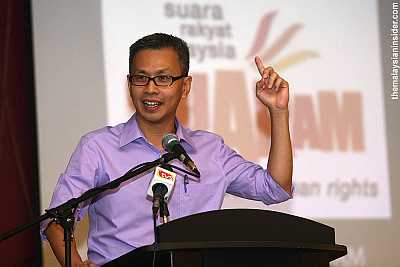 Pua accused Najib of having chosen to protect the thickly-lined pockets of his political colleagues and cronies instead of enforcing fair policies for taxpayers, pointing to the continued highway toll charges imposed on the public.

“The PLUS highway for example was built at the cost of only RM6.9 billion but it made PLUS a net profit of more than RM1.3 billion in 2011 alone,” he said, adding that the federal government has extended the toll period for concessionaires by an additional 27 years, until 2038.

The DAP publicity chief highlighted that the records show the PR state governments had managed to cut down corruption and improve their service in the public sector, lowered debts that led to better financial reserves and also institutionalised welfare benefits for citizens within the past three years.

He said that if PR won Putrajaya in the next elections, it would change not just the highway tolls but all existing lopsided private deals between the federal government and independent power producers, water suppliers and more.