Indonesia’s PT Lion Grup is in talks with National Aerospace and Defence Industries Sdn Bhd (Nadi) to send all its 100 aircraft to be serviced and maintained in Malaysia after both parties inked a landmark deal yesterday to set up a new low-cost carrier (LCC), Malindo Airways, that will take to the skies on May 1 next year.

Malindo will operate from its transit hub at the soon-to-be-completed klia2 and initially ply major routes between Malaysia and Indonesia, and it also wants a slice of the domestic market, including flights to Sabah and Sarawak, and is in talks with the Government for that. Prime Minister Datuk Seri Najib Tun Razak said after the signing ceremony that Malindo would have a secondary hub in Kota Kinabalu.

Besides that, Malindo will also operate regional routes within the four-hour flying radius from klia2 to cities such as Manila, Bangkok and Hanoi.

“Malindo Airways will have a Malaysian air operating licence and its base will be klia2,” Lion Air president director Rusdi Kirana said. He and his brother and several investors own PT Lion, which in turn operates Lion Air.

Besides setting up the new airline, both companies signed three other agreements for maintenance, repair and overhaul (MRO), supply chain, training and supply of manpower to Lion Air. 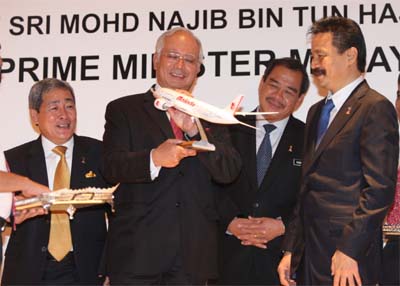 Sleek and stylish: Najib receiving a model of a Malindo aircraft from Rusdi (right) while Transport Minister Datuk Seri Kong Cho Ha (second from right) and Ahmad look on.

“Lion Air wants to send its entire fleet for MRO works to Nadi and they will do all the checks, from A to D, in Malaysia. That is the ultimate plan but the discussions are still under way but this could happen within the next two to three months,” said a source.

Though Malindo is a LCC, Rusdi said the new airline would offer free in-flight entertainment, a light meal, and WiFi facilities. It will also use aerobridges at airports and offers two seating classes business and economy and its seat pitch is wider at 31 inches.

It will use the new B737-900ER aircraft. At its launch, it will have five aircraft and will add 12 every year to bring the total to 100. The aircraft will be sourced from Lion Air, which had in February ordered 400 aircraft from Boeing for its operations.

On fares, Rusdi said: “We will offer ticket prices lower or at least at par with that of AirAsia.”

Analysts believe Malindo’s entry in the local scene will spark a fierce price war the same way Firefly did when its started its jet operations some years ago.

“It is fantastic for consumers, there will be more choices and if you remember how Firefly jet operations entered the scene and intensified competition, then you can expect the same to happen with Malindo,” said a Maybank Investment analyst.

Another market player said “the entry of Malindo will change the dynamics of the game and it would be interesting to see what the incumbents will do to protect market share.”

But the players themselves are unperturbed with Malindo’s entry.

AirAsia group chief executive officer Tan Sri Tony Fernandes in reply to queries from StarBiz said in an SMS: “(The entry of a new player) is good for Asean and it helps our vision of one Asean sky and hopefully one day we can own 100% of our overseas ventures. (The deal has) no impact on us. As a two-class product, MAS will be most affected as they (Malindo) want to use aerobridges and serve refreshments. We have a large market share and we have always been ready for more entrants. We welcome (them),” Fernandes said.

He added that “it is great that the our Government injected more competition and is looking at Asean. We hope that the same level of competition will be applied to airports.”

MAS chairman Tan Sri Md Nor Yusof said “Asean has more than 600 million people, the numbers were growing and so is individual wealth. Malaysia with its first world infrastructure and irreplicable geographic endowment will have more than enough (room) for all to accrue.”

Lion Air is Indonesia’s largest privately-owned airline that operates 600 daily flights and controls 45% market share of its domestic market and has been on a regional expansion.

Earlier it tried to set up an LCC with Berjaya Air but the deal fell through. It also owns Batik Air, its long-haul airline that will begin operations in March next year.

“For Nadi, to be an airline operator is a natural progression since the group had been in the aviation industry for nearly three decades,” said its spokesperson.