Malaysia Airports Holdings Bhd (MAHB) is expected to raise RM616mil from its private placement after fixing the issue price at RM5.60 a share.

In a filing with Bursa Malaysia, MAHB said the issue price had been fixed at RM5.60 per placement share, representing a discount of about 0.9% to the closing market price of MAHB shares on Wednesday at RM5.65.

MAHB said its book-building exercise had been completed and had attracted domestic and foreign investors.

In an earlier filing, MAHB said this private placement would allow the company to meet its obligations in connection with the construction of klia2 and, at the same time, maintain the fast-track nature of the construction of the low-cost carrier terminal, which is scheduled to be completed in April 2013.

The construction work for klia2 started in October 2009. 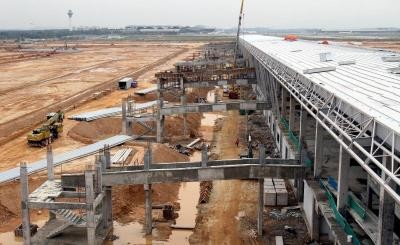 klia2 is scheduled to be completed in April 2013

It is now estimated to cost between RM3.6bil and RM3.9bil, at least 80% more than its provisional budget of RM2bil.

The increase in size and cost would cater to an expected 45 million passengers.

However, the analyst was positive about the long-term prospects of the klia2 development.

Hong Leong Research said MAHB’s earnings would be diluted 4.6% for the current financial year ending Dec 31 (FY12) and up to 9.1% for FY13 based on an assumed price of RM5.44 per placement share announced previously.