Malaysia Airports Holdings Bhd‘s (MAHB) plans to raise money from the capital market to fund a huge increase in klia2‘s construction costs will compromise public interest because the government’s stake will be diluted, the DAP’s Tony Pua said today.

The opposition Pakatan Rakyat (PR) lawmaker urged the federal government and its investment arm Khazanah Nasional to investigate what caused the price of the new low-cost carrier terminal to balloon from RM1.7 billion in 2007 to RM3.9 billion currently.

“What is of concern to the public is the fact that MAHB’s ability to repay the debt without future bailout by the government is by no means assured,” he said in a statement today.

Pua (picture) noted that MAHB had, in a January 30 filing to Bursa Malaysia, announced that it would raise RM598 million from a proposed share placement exercise that ran counter to what its managing director Tan Sri Bashir Ahmad said previously.

Bashir had last November denied that public funds will be used to finance the inflated cost of the new terminal. 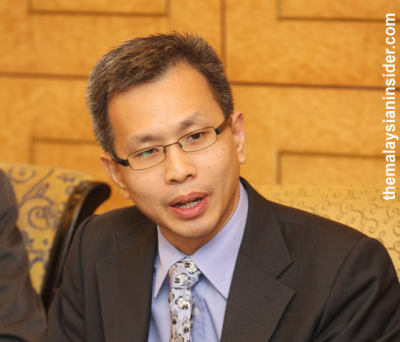 In an information memorandum submitted to Bursa Malaysia, MAHB stated that “the gross proceeds to be raised from the Proposed Private Placement will be utilised to part finance the additional capital expenditure to be incurred as a result of the enhancement in specifications for the new low-cost carrier at Kuala Lumpur International Airport”

“The action by MAHB to raise additional funds from the market proves that public financial interest has been compromised as a result of the RM2.2 billion increase in cost of klia2,” Pua, the Petaling Jaya Utara MP, said.

He also said that the current major shareholders in MAHB, who act as trustees of public money, will be forced to dilute their stake by as much as 10 per cent as a result of the exercise.

He pointed out that majority shareholder Khazanah, at 54 per cent, will see its stake in MAHB cut to 49.1 per cent; while the Employees Provident Fund (EPF) and Skim Amanah Saham Bumiputera (ASB) will have their 10.3 per cent and 6.8 per cent stakes sliced to 9.4 per cent and 6.2 per cent respectively.

Pua added that the MAHB info-memo also said the earnings per share of the airport management group will be “reduced proportionately with the increase in the number of MAHB shares” assuming that its net earnings for the past year remain unchanged.

This plan to issue new shares to raise funds, he said, was on top of MAHB’s RM3.1 billion debt in 2010. He highlighted that RM2.5 billion had gone into financing the construction of klia2.