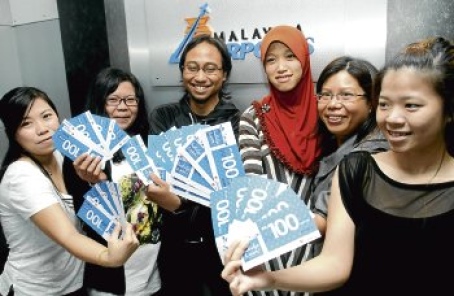 Several of KLIA‘s online contest winners at the prize-giving ceremony.

"We were extremely encouraged by the response," she said at the prize-giving ceremony recently.

She said the aim of the contest was to engage the online community to recognise KLIA as a lifestyle destination. All contestants needed to do was to share the KLIA promotional video clip online.

One of the contest winners, Sim Bee Ling said that it was easy to participate in the contest.

"I saw a link on my friend’s Facebook wall, checked it out and decided to share the video link."

"It is hard to believe that I am now one of the winners," Sim added.

"I was surprised and was really excited to learn that I won.

"As an information technology support officer, it was to my advantage as I go online most of the time," he added.

MAHB‘s online contest is in collaboration with the Malaysia Asia travel blog. All winners received a RM500 shopping voucher.

Faizah also announced that 50 per cent of klia2‘s development has been completed.

Upon full completion, klia2 is expected to cater to 45 million passengers compared with 35 million at the existing airport.

"klia2 is expecting to chalk about RM1.6b in retail sales on full capacity compared with RM900 million sales from KLIA.

klia2 is expected to be completed in April next year.