The construction of the klia2 terminal to produce a larger capacity low-cost carrier terminal is well ahead of schedule and will be completed by April, Deputy Transport Minister Datuk Abdul Rahim Bakri said. 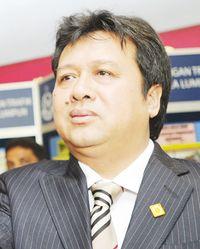 Answering a question from Tony Pua (DAP-Petaling Jaya Utara), he said the construction was now 62 per cent completed, which was more than the 56 per cent completion the government was targetting last month.

“The cost of the airport now is RM4 billion,” said Abdul Rahim, who admitted that it was initially estimated to be only RM2 billion but had gone up because of “new necessities” and a “bigger airport”.

Abdul Rahim said the LCCT terminal was already serving passengers beyond its original capacity.
He said the government was not spending its own money to build klia2 as it was Malaysian Airports Berhad? (MAB) own allocation under its sukuk bond, which they would later repay according to future earnings.