The move will allow the airline to offer more flight transfer, or ‘Fly-Thru’, services to more destinations, says its CEO 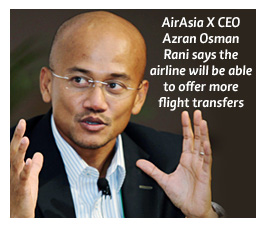 AirAsia X, the long-haul low-fare airline affiliate of AirAsia Bhd, believes that moving to klia2, the country’s new low-cost carrier terminal (LCCT), will provide it with a tremendous opportunity to grow bigger and stronger.

Currently, the service enables passengers to connect AirAsia Malaysia and AirAsia X flights at the LCCT using only a single booking itinerary and travelling on a single ticket.

"This is something that we have pioneered. Before us, no other low-cost carriers tried to do this," he said.

Azran believed that AirAsia X’s cost structure in terms of airport fees will remain the same following its move to klia2. The new terminal is expected to be ready by end of April next year and start operating in May.

"Certainly, the contractual agreement is until 2014. There isn’t a revision as I understand it. After that, maybe it’ll be a sort of cost inflation-type adjustment," he said.

Meanwhile, AirAsia X is not shaken by the entrance of new rival Malindo Airways, which is Malaysia’s second low-cost airline.

Azran said besides having the first-mover advantage, AirAsia has a powerful short-haul feeder network and a long-haul arm network.

"Any other airline that does not have the depth and long-haul model as well as international hubs must surely find it extremely difficult to even catch up. One thing that is very clear in the low-cost industry all over the world is that first-mover counts," he said.