Tenaga Nasional Bhd (TNB) will build a 132kV sub-station and a district cooling plant for the supply of chilled water and electricity at the new low-cost carrier terminal, also known as klia2, in Sepang, Selangor.

The deal, struck with Malaysia Airports Holdings Bhd (MAHB), is for a build-operate-transfer model for a concession period of up to 20 years.

In a Bursa Malaysia filing, TNB said 80% of the klia2 generation plant project’s cost of RM388mil would be funded through external borrowings while the balance would be via shareholders’ equity. 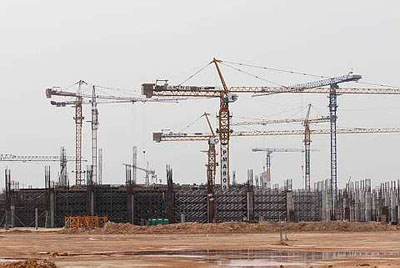 Work in progress: Almost half of klia2 has been completed

The klia2 generation plant would supply energy cooling to the airport’s core facilities, comprising the terminal building, with 250,000 sq metres of covered area, and for private facilities at the integrated complex.

Within the next 60 days, Airport Cooling Energy Supply will allot shares to MAHB and TNEC at a subscription price of RM21.9mil and RM77.3mil respectively.

The deal for the klia2 generation plant project was struck after a public tender process by MAHB.

In February last year, MAHB had invited proposals for the project.

In its request for proposal dated Feb 11, 2010, MAHB had sought for 20,000 refrigeration tonnes of chilled water and 25MW of power consumption at klia2.