THE one unanswered question in the ongoing spat between AirAsia andMalaysia Airports Holdings Bhd (MAHB) is why.

Why are they fighting now over a planned increase in passenger service charges (PSC) in the form of airport taxes when the hike was made public months ago?

Late this week AirAsia went viral in its campaign against the increase in airport taxes.

It took out advertisements in newspapers, went online, twitted about the issue; in short kicked up a fuss over the planned move that would see international passengers pay RM65 from Dec 1 instead of RM51 previously and RM31 instead of RM21 for passengers departing from the low cost carrier terminal.

While AirAsia’s boss Tan Sri Tony Fernandes has raised a commotion over the issue in the interest of the passengers, he stopped his tirade after twitting his reasons for doing so. He said the airport taxes were raised when facilities at LCCT (Low Cost Carrier Terminal) remains poor, the new klia2 will cost nearly double its original RM2 billion price tag and its opening is delayed to April 2013 from August 2011 and that the airport taxes to destinations such as Kuching and Langkawi is half the fare the airline charges.

“These are the reasons we are upset. Everyone wants to fly. We need efficiency. I end this and hope Malaysians are enlightened,” he twitted.

Could it be that AirAsia wants a percentage share of the PSC since it has brought the passengers into the LCCT as it claims in its “no airport tax raise” campaign that it does not benefit from the PSC? Fernandes did not comment on that possibility. 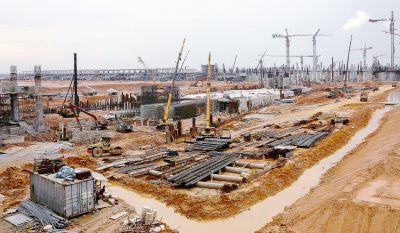 Bone of contention: AirAsia says it wants a ‘kopitiam’ not a ‘Shangri-La’ terminal but MAHB says the cost overrun for klia2 is due to projection that a larger airport is needed to cater to 45 million passengers.

As it is, airlines are incentivised for the traffic they draw into airports.

There is an incentive programme where airlines are paid for the increase in passenger numbers besides the free landing for three years for new flights.

Whatever the reason may be, it is a question that begs an answer.

In an interview with StarBizWeek yesterday, AirAsia chairman Datuk Aziz Bakar says: “What we are asking is – to enable us to keep our fares low and encourage more visitors to come here – we just want a kopitiam’ terminal not a Shangri-La’ terminal.”

The fight over the PSC charges certainly overshadows the furore he had over the huge cost of building klia2.

On Tuesday, MAHB called the media to tell their side of the story over allegations of cost overrun for the klia2, and to build what can be considered a luxury low-cost terminal.

It also revealed the cost of building klia2 would be in the range of RM3.6 billion and RM3.9 billion from RM2 billion previously and its rationale for that was that it was building an airport which is 71% bigger than its original size.

The question many are asking is why is there a need to have such as large airport that can cater to 45 million passengers. Is there going to be so much traffic to warrant such as huge, expensive low cost terminal?

MAHB’s rationale seems to be that the main customer, AirAsia, is growing rapidly and it is building capacity now for the future. Whether that it a viable move is unclear as it is bringing its future capital expenditure of about RM700 million forward.

Notwithstanding the fact that there may be other airlines that may also want to fly in and out of klia2 and that would see traffic rise beyond the forecast 30 million passenger AirAsia is looking at.

It then makes sense to have an airport that will have a very large capacity.

In its notes to journalist to justify its extra spending on klia2, MAHB stated that there would be “continued growth in low cost travel – 30 million passengers by 2017.”

Aziz did say that “our projections is that we can reach 30 million even in 2015 and based on our track record we have delivered what we projected.”

So to avoid an expansion just three years after klia2 is built, MAHB are putting in more capacity upfront in view of the robust growth its main client is expecting.