Disabled groups happy with Malaysia Airports but gives their thumbs down on AirAsia's decision not to use them when the airport is completed.

Imagine yourself wheelchair-bound, staring down from an airplane doorway to the ground almost five metres below. You have to negotiate a dangerous gap if you want to get onto an ambulift which will lower you down. 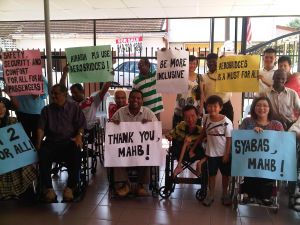 This is what Danny Tan, who has muscular dystrophy and wheelchair-bound, has had to endure whenever he wanted to fly. But sometimes it was even worse for Tan, whose limbs are stick-thin and his bones fragile due to his condition.

“Earlier this year I returned from China, it rained heavily when I touched down at the LCCT Terminal and they told me the ambulift was not available and asked if they could carry me,” said Tan, who take flights 4-5 times a year.

However, Tan told the crew only his wife knew how to lift his body correctly without injuring his brittle bones.

“I believe they just wanted to save time by not providing the ambulift. My wife had to walk down the staircase while the air hostess held an umbrella over me,” said Tan, who is chief coordinator for the Shuang Fu Disabled Independent Living Association.

Such inconvenient and stressful situations are commonplace for the disabled and that is why they have been especially vocal about having aerobridges for the impending klia2.

Today, a group of 10 NGOs fighting for the disabled held a press conference to welcome the decision made by Malaysia Airports Holding Berhad (MAHB) to install aerobridges at KLIA.

“We thank MAHB for taking into consideration the voices of the people including us, persons with disabilities,” said Barrier-free Environment and Accessible Transport (BEAT) pro-tem president Christine Lee.

The disabled community, including BEAT, has been lobbying for the inclusion of the aerobridge, and has held two protests – once in August and another in October, asking MAHB and the government for it.

Lee had also personally met with Transport Minister Kong Cho Ha over the matter in September. She thanked Kong, the cabinet, as well as politicians from both divides.

On Nov 29, MAHB confirmed that the new LCCT in Sepang (klia2) will include 80 aerobridges, when it is due to be completed in April 2013.

‘We deserve to be accorded equal rights’

“We are disappointed that AirAsia is not going to use aerobridges when klia2 is completed. We urge AirAsia not to disregard the needs of its passengers especially persons with disabilities, people with reduced mobility, elderly, pregnant women and children,” said Damai Disabled Persons Association of Selangor and Federal Territories Malaysia president, V Murugeswaran. 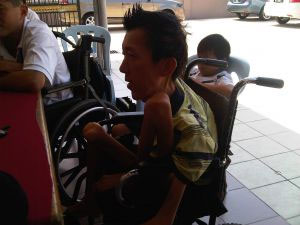 However, AirAsia CEO Tony Fernandes, who has been a vocal opponent of the use of aerobridges, said his planes will not be using the aerobridges even if they were built at klia2. He claimed it was a waste of money as customers did not want them.

Murugeswaran said Aerobridges were not only necessary but crucial to ease mobility, enhance the safety and security and comfort of all passengers in all weather conditions.

“As full paying consumers, we deserve to be accorded equal rights to enjoy basic public facilities and services that are convenient and safe for us to use.  An aerobridge could determine whether we can fly or not.

“We call on the government to ensure that all newly built airports be equipped with aerobridges. We also urge the authority to come up with regulations to make it mandatory for all airlines, including budget air carriers, to use aerobridges at airports where provided,” said Murugeswaran.

Asked about the view that aerobridges were too costly and ambulifts were sufficient for the disabled community, Murugeswaran said that the extra cost incurred by MAHB were not from the aerobridges.

“When they announced that KLIA costed about RM2billion, the plan already included aerobridges, and they initially scrapped it just because one airline was against it,” said Murugeswaran.

Lee said that ambulifts were not the solution for disabled people.

“Ambulifts are problematic and dangerous and furthermore, with the increasing volume of flying customers, it would not be enough.

LCCT currently only has two. Aerobridges would be much safer and more convenient, for all, not only for us,” said Lee.