The spat between airport operator Malaysia Airports Holdings Bhd (MAHB) and low-cost carrier AirAsia Bhd has reached a stage where both parties were showing documents to prove their case over the controversial upgrade of the low-cost air terminal klia2.

AirAsia issued a press statement to refute claims made by MAHB that it had asked for a bigger airport and said it should not be blamed for the cost of constructing klia2 which had nearly doubled from RM2 billion to RM3.9 billion.

The low-cost carrier said that its chairman Datuk Abdul Aziz Bakar had in November 2009, via a letter, warned MAHB that the current site of klia2 was unsuitable and would cause construction cost to soar.

“The site will definitely be more expensive than the planned budget of RM2 billion. AirAsia had also estimated for MAHB that the construction cost would increase to between RM3.6 billion and RM3.9 billion,” it said in a statement yesterday as it wanted to clarify some of the claims made by the airport operator. 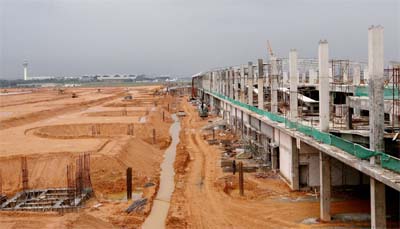 Controversial terminal: The completion deadline for klia2 is delayed by six months because of the dispute over the fully-automated baggage handling system.

AirAsia is also calling for a press conference today on the issue.

Last Tuesday, MAHB announced it was building a bigger airport to cater for the bullish passenger growth projections made by its biggest client, AirAsia.

As a result, the cost of klia2 hasgone up and passenger capacity rose to 45 million from 30 million.

The completion deadline was also delayed by six months to April 2013 because AirAsia wanted a fully-automated baggage handling system (BHS) and the request for it was only made in June.

AirAsia had also posted a letter from AirAsia X chairman to MAHB saying that it didn’t know that klia2 was planned for 45 million passengers and it was only informed of the 30 million figure.

“This figure has never been officially changed by AirAsia or MAHB since Aug 9, 2011,” the low-cost carrier claimed.

The rebuttal by AirAsia came a day after MAHB posted documents on its website entitled “Why klia2 has to be bigger” last Friday that showed AirAsia’s passenger growth estimates and that the airline expected to carry 30 million passengers by 2015/16. Hence, the justification by MAHB to build a bigger airport to cater for that growth was crucial.

In a counter claim to AirAsia’s statement, MAHB said last night that “47 meetings had been held between MAHB and AirAsia since April 2010 until now to discuss and address all of AirAsia’s requirements.

“A workshop with all stakeholders including AirAsia was also held in September 2009 where the Needs Statement for klia2 was formulated.”

The request for a fully-automated baggage system made by AirAsia in June would push the completion date forward by six months.

AirAsia has denied that it had asked for a fully-automated baggage handling system (BHS).

It cited a letter from AirAsia X chairman to MAHB dated Aug 18 that stated: “AirAsia re-confirmed our request for a semi-automated BHS instead of a fully-automated BHS. “MAHB has unilaterally decided on a fully automated BHS to accommodate 45 million to 60 million passengers which was again, not agreed by AirAsia.”

To counter that, MAHB posted Fernandes’ letter dated June 16 on its website which stated: “our (AirAsia) official response to MAHB is that AirAsia prefers that the BHS system be developed as shown in BSC option 3: dual tilt tray sorter with full connectivity (in short it is a fully-automated BHS).”

The letter added that “because it would be very difficult to implement an expansion to the BHS system within less than five years after opening, this capacity must be in place under phase one system at the onset of completion of the LCCT2 (klia2).”

The letter from Fernandes to MAHB cited a meeting held between AirAsia, MAHB and the Transport Ministry whereby the carrier had to decide on the BHS.

The letter also acknowledged a possible delay to the opening of klia2 because of the BHS.

On the 4km runway, AirAsia argued that its request for a 3km runway had been according to its original requirement to MAHB, in order to cater for AirAsia X’s wide-body Airbus A330.

AirAsia claimed that it was by chance that it discovered the runway was shorter and asked MAHB to rectify the situation.

“As such, this should not be considered as an additional request or requirement from AirAsia as the original plans have always been to cater for a 3km runway. Therefore, no additional cost should have been incurred,” AirAsia said.

MAHB had maintained that it was AirAsia that wanted a 4km runway.