SOMETIMES, the market should trust what a company is doing. The case in point is CIMB Group Holdings Bhd when it acquired PT Bank Niaga in Indonesia. The deal was first panned by investment analysts but as it turned out, it was one of the best deals done by the CIMB Group.

Hindsight is always twenty-twenty as opinions are framed at the point of a deal. The same can be said of Malaysia Airports Holdings Bhd (MAHB) when it revealed that the cost to build klia2, the new dedicated low-cost terminal, was anything but that. Cost has ballooned from an original estimate of RM2 billion to between RM3.6 billion and RM3.9 billion.

The company justified that by saying the scope of the airport was far larger than planned. The floor space is up 71%, the aircraft stand is 61% larger, the runaway has 65% more tarmac space and the public infrastructure is up to 260% more extensive. It will have a fully automated baggage-handling system and most of the bells and whistles a major airport will provide.

klia2 will set the new standard for low-cost terminals. It’s more swanky than a glorified warehouse the current building is and the larger, roomier building will not make people, of which there are more middle-income travellers taking cheaper flights, wonder if they should have put up with a terminal that has an ambience of a football stadium. 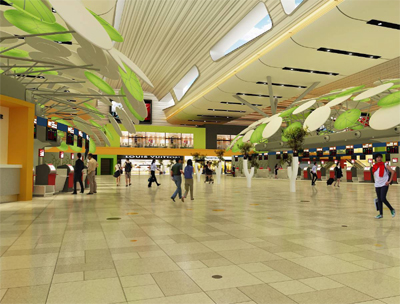 An artist’s impression of klia2. Works on the terminal, which is located next to Kuala Lumpur International Airport, has reached 40% to completion.

And yes, the controversial aerobridges will be built for those airlines that want to use them.

The final cost can be seen as a major savings from the estimated RM10 billion MAHB would have had to spend had it built the second wing for Kuala Lumpur International Airport (KLIA).

So by building a high-cost, low-cost terminal, MAHB might in a way defray the need to spend so much more just to cater for more inbound travellers.

The low-cost carrier terminal (LCCT), which can handle 15 million passengers, will see many more people pass through its doors. There is a need for expansion but the question remains as to why the new terminal has 50% more capacity than its original plan, 300% more than the current capacity of LCCT and 180% more than the main terminal of KLIA?

The crux of the issue is why build so much capacity ahead of demand? Is it a wise and prudent move?

Analysts don’t think so. Many are worried about under-utilisation of capacity when the airport opens and with the higher cost and depreciation, that will whack the bottomline of MAHB. They are also worried about the potential issuance of new shares that will dilute earnings even more to fund the expansion.

They have a right to be concerned as their recommendations are based on their clients’ interest first.

But for MAHB, the airline operator sees things differently. It feels that by front loading its capital expenditure (capex), it will be able to avoid an additional RM750 million-plus in cost by bringing forward RM700 million in capex.

The bigger floor space with five times the commercial space of the main terminal will lower unit costs and bring in more revenue. It will offset the cost from revenue it gets from the Government over the years of the concession in the form of rental income or tax breaks. It also feels that the dynamics of the bigger terminal will see an internal rate of return that is equal the original cost of the terminal.

The new airport will be built during a time when MAHB is expecting a big increase in air travel. It knows just what the airlines that use its airports are expecting in terms of passenger growth and feels that once a critical mass is reached, more airlines will divert flights to Kuala Lumpur to grab passengers.

MAHB has said that capacity utilisation of the airport will be about 50% when it opens in 2013 but will gradually rise and reach 45 million by 2020-2022. Passenger travel might grow faster than gross domestic product but some analysts don’t agree with that assumption as it is hard to fathom how a low-cost airport can see a near three-fold increase in travellers in just about a decade.

Right now, its a case of wait and see. There is no guarantee that plans and projections will materialise but like any business, expansion decisions are made by what the company thinks is going to happen in the future. It’s a calculated risk and if they prove detractors wrong, then no one will really complain. If they don’t, then the additional cost will be a huge price to pay.