Fernandes believes that “2012 is going to be a fantastic year for AirAsia”.

“I think for the joint collaboration with MAS, there’s always scepticism but I am very bullish. I think we are going to have a very strong airline sector and 2012 is going to be a great year for both airlines,” he said.

He remained mum about what both airlines had up their sleeves but said he was happy with the quality of work done on both sides.

“It depends on how you view AirAsia – as a short term player or a long term player. People forget that we are 10 years old and we have had to fight so many battles in the first 10 (years). The next 10 (years) will be a lot easier,” he said. 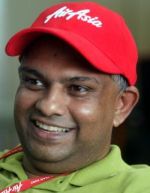 AirAsia will hit its first decade in business on December 8.

“I’m optimistic, I have a smile on my face. Sure, we are not entirely happy with what happened at Malaysia Airports Holdings Bhd but I am still very bullish on the industry,” he said, noting the recent hike in passenger service charge.

“I think the results are fantastic. We have debts denominated in US dollar and every quarter, they re-state that debt and since the ringgit has weakened, the debt has grown,” he said.

“The operating income has increased by 2%, yet Petronas has increased fuel by 40%,” he said, but added that the operational growth “shows the strength of the underlying business and robustness of the model”.