MALAYSIA Airports Holdings Bhd (MAHB) (5014) says the process of building the new permanent low-cost carrier terminal, now known as klia2, has taken time due to extensive tender process and it not wanting to compromise on the terminal’s quality.

MAHB managing director Tan Sri Bashir Ahmad said the open tender process and selection of bidders were longer than anticipated. Bashir added that most of the major works have been awarded.

“We will not rush the job. While we fast track the project, the quality will be maintained at all times,” he said in his speech during the klia2 groundbreaking ceremony in Sepang yesterday.

It was officiated by Prime Minister Datuk Seri Najib Razak.

Bashir later told reporters that the terminal building was targeted for completion by April 2012, and the runway should be completed two to three months after.

The runway’s earthworks is behind schedule but the project team and contractor are working towards increasing the work rate to complete the runway soonest, he added.

The cost of klia2, which is located 2km from the current main terminal building, will exceed RM2 billion since most major contracts awarded so far stand at RM2 billion. 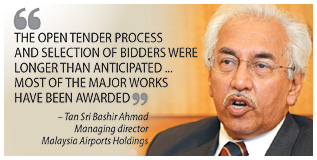 The terminal design, which has undergone changes to accommodate viewpoints from low-cost carrier (LCC) AirAsia, has seen the planned terminal size grow from 150,000 sq m to 242,000 sq m in the last two years.

The terminal will be able to handle 30 million passengers but has the flexibility to expand for future growth.

“By comparison, the current temporary LCCT is only at 60,000 sq m, handling 15 million passengers. It was designed to suit AirAsia’s business model-point-to-point operations, single narrow-body operations, no aero-bridges and no bussing of passengers,” said Bashir.

However, a larger terminal size is now required as AirAsia’s model has grown from a point-to-point operator to 50 per cent of its traffic being transfer traffic.

There will also be 68 boarding gates instead of 55 gates, which are sufficient to handle 30 million passengers.

“This is also in line with AirAsia’s requirement for additional gates to minimise towing of aircraft to reduce their operating cost,” he added.

Bashir said that it was important for all airlines to use aero-bridges in the interest of passenger comfort and safety. MAHB will look to install the facility in klia2.

Bashir added that MAHB was in discussion with LCCs like AirAsia over the usage of aero-bridges and needed a firm commitment from the carriers soon.

AirAsia has previously resisted using aero-bridges as it seeks to maintain a 25 minute turnaround time and low operating cost.

MAHB’s aero-bridge charge per flight (one way) is RM85, which works out to be 42.5 sen per passenger for a flight carrying 200 inpiduals.

On public transportation connectivity at klia2, he said MAHB is planning for an ERL extension and would look at a KTM line in due course.