Longer and more spacious trains will ply the Port Klang-Sentul and Seremban-Rawang routes from this weekend to serve some 98,000 commuters.

The rest will be introduced in stages by June.

When all the new trains hit the track, waiting time will be reduced from half an hour to just 10 minutes.

KTMB corporate communications senior manager Mohd Fazil Ismail expects immediate improvement to the service, given that each train can hold 1,100 passengers, compared to the 400-passenger capacity of the present three-car units.

The trains, made by China’s Zhuzhou Electric Locomotive company and costing close RM50 million each, would drastically reduce overcrowding in KTM trains along the popular routes, he said during a media tour of the sophisticated coaches. 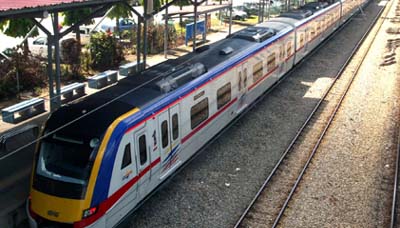 The new six-car train waiting at the Rawang station.

“Some passengers have complained being made to wait for the next train due to overcrowding. We hope to avoid such situations in the future,” he said, adding that KTMB received an average of two to three written complaints a day.

About 70,000 commuters take KTM trains to and from work during the morning and evening peak hours. A further 28,000 passengers travel from 10am to 4.30pm.

The six-car units incorporate several passenger-friendly features, including an LCD screen notification system, plug points to charge electronic devices, and a two-way intercom between passengers and drivers for emergencies. There are also the women-only coaches.

“Our voice automated announcement and LCD notification system are especially helpful to disabled passengers, alerting them of arrivals at a station,” he said.

Each unit can accommodate more standing passengers with its three-row handrail. An open space concept enables passengers to move from coach to coach.

Mohd Fazil said the train also had security features allowing doors to be opened manually and windows to be broken in case of emergen-cies.

“Each coach has three CCTV cameras for the driver to monitor what’s going on. There are also ladders for emergencies,” he said.

He said KTMB had been planning to get the new trains since May 2010 in line with the National Key Result Area objective of improving urban public transportation. 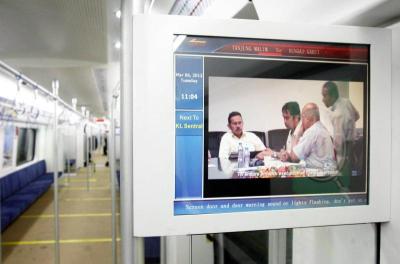 Helpful feature: The new trains will be equipped with an LCD screen notification system.

The remaining RM110 million would be used to switch to a token-based ticketing system to be introduced in May.