Getting to Kuala Lumpur International Airport (KLIA) by train is expected to be significantly pricier next year after Express Rail Link (ERL) announced a 57 percent fare hike for its KLIA Ekspres service.

"This is the first revision since ERL commenced operations almost 14 years ago.

The company said the new price of RM55 is still at a discounted rate as it was authorised for a 83 percent hike to RM64 as per the terms of its concession.

It added that the KLIA Ekspres still offered the lowest airport rail transfer fare in the world.

ERL chief executive officer Noormah Mohd Noor said the company is working with its partners to provide discounts to help customers cope with the hikes.

"We are working with our partners such as MasterCard to offer attractive discounts.

"For example, passengers travelling to the airport on KLIA Ekspres can pay as low as RM40 per trip, which is only RM5 more than the old fare of RM35,” she said.

Under the current fare structure, for a journey from KL Sentral, getting to Terminal Bersepadu Selatan (TBS) would cost RM4.20, Putrajaya/Cyberjaya costs RM9.50 and Salak Tinggi costs RM12.50.

After the hike, a journey from KL Sentral to TBS would cost RM6.50 while getting to Putrajaya/Cyberjaya and Salak Tinggi will cost RM14 and RM18.30 respectively.

"TravelCard users will enjoy discounts of 17 percent to 83 percent, with an average discount of 45 percent.

"Senior citizens and disabled persons will continue to receive discounts of 30 percent on one-way fares on the KLIA Transit," it said. 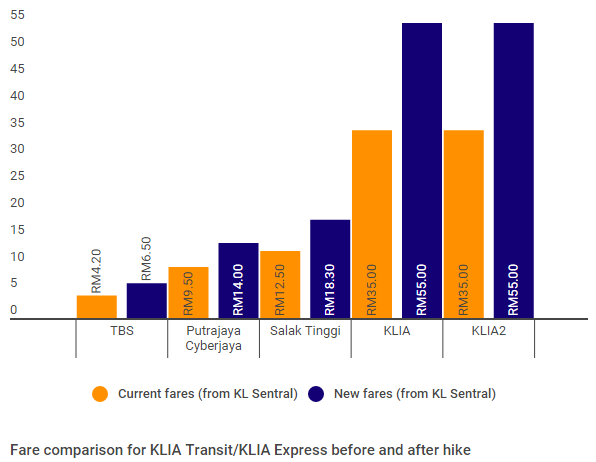 The new fare structure can be viewed here.